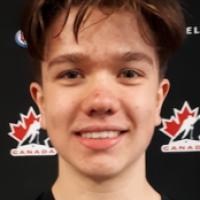 When and where did you begin this sport?
He began playing Para ice hockey at about age 10 with the Calgary Venom in Alberta, Canada.
Why this sport?
He was inspired to pursue the sport after watching the 2012 World Sledge Hockey Challenge in Calgary, AB, Canada. "When I tried sledge hockey I loved it instantly. I was excited to learn everything and to compete in the sport I have loved since I was born. Sledge hockey has opened up a whole new world for me."
Name of coach
Ken Babey [national], CAN
Preferred position / style / stance / technique
Forward

Most influential person in career
His parents. (behindeveryathlete.com, 30 Oct 2019)
Hero / Idol
Canadian Para ice hockey player Billy Bridges. (hockeycanada.ca, 06 Sep 2019)
Superstitions / Rituals / Beliefs
He writes in his journal and meditates daily. (behindeveryathlete.com, 30 Oct 2019)
Sporting philosophy / motto
"One thing that has also helped me when times are tough is to work regularly on mindset and mentality. Figuring out what makes me function at a high level both physically and mentally on the ice has been so important to my development." (behindeveryathlete.com, 30 Oct 2019)
Ambitions
To compete at the 2022 Paralympic Winter Games in Beijing. (hockeycanada.ca, 06 Sep 2019)
Impairment
He was born with proximal femoral focal deficiency [PFFD]. The condition causes a malformation in the upper part of the femur. His parents decided to have the limb amputated when Auren was age one. "When I was born, my leg was not fully developed. I had multiple surgeries when I was young and I've had multiple surgeries [since]. My leg is short and didn't grow all the way so I basically have half a leg." (behindeveryathlete.com, 30 Oct 2019; calgaryjournal.ca, 13 Dec 2012)
Other information
TIME ABROAD
In 2017 he and his family moved from Canada to Pittsburgh, PA, United States of America, after his father was offered a transfer through his job. Auren played for the Pittsburgh Mighty Penguins Para ice hockey team while there, and also spent time training with the US development team. In 2018 he was offered the chance to join Team Canada. "My second favourite hockey team was always the Pittsburgh Penguins and we knew they had a sledge hockey organisation, so we thought it would be a great opportunity. The move down [was] great because there are more sledge hockey teams than in western Canada, and a lot more competition. Ever since I started playing, making the Canadian national team was my dream so I jumped at the chance." (behindeveryathlete.com, 30 Oct 2019)