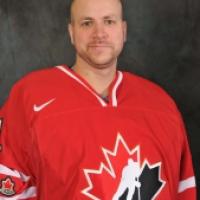 When and where did you begin this sport?
He began the sport at age 24 in Montreal, QC, Canada
Why this sport?
He had played ice hockey his entire life. When he lost his leg he searched for a version of ice hockey for people with an impairment.
Preferred position / style / stance / technique
Goaltender

SWITCHING POSITIONS
In 2004 he was accepted onto the Canadian national sledge hockey team as a forward. During his second season the team was looking for a goaltender, so he volunteered and served as a replacement at the 2006 Paralympic Winter Games in Turin. (benoitstamand.com, 01 Apr 2012)

MOTIVATIONAL SPEAKING
He speaks regularly to businesses and children in Canada as part of the RBC Olympians community ambassador programme. His goal is to show children how potentially tragic experiences, such as having cancer and losing a limb, can be turned into positive outcomes. "In life there are many obstacles, but nothing is insurmountable. I am living proof of that." (enbeauce.com, 19 Mar 2013, newswire.ca, 09 Oct 2013)

OCCUPATION
He works for RBC Royal Bank in Canada in administration. (Athlete, 06 Mar 2014)