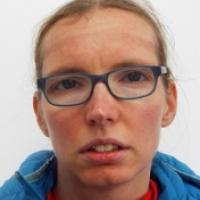 When and where did you begin this sport?
She began running at university in York, England.
Why this sport?
"One of my [university] house mates was a runner, I'd always wanted to run. I didn't really think I was good enough, so I didn't really think it was a good idea. I started but I wasn't improving much, and it was difficult to find a guide at the time." She began to enjoy running more after she took up Para triathlon.
Club / Team
New Marske Harriers: Redcar, ENG
Training Regime
She incorporates trapeze, yoga and pilates into her training routine.

Other sports
She won a bronze medal at the 2013 Para Triathlon World Grand Final in London, England. (britishathletics.org.uk, 20 Mar 2019; triathlon.org, 13 Sep 2013; SportsDeskOnline, 06 Dec 2019)
Other information
GETTING INTO TRIATHLON
She found the sport of Para triathlon shortly after taking up running. "There was a project for visually impaired athletes to take part in the London Triathlon. It was on my list of things to do, alongside running the Great North Run and the London Marathon. So, I was asked to join this disability triathlon group after doing London, these were early days for Para triathlon. I joined in 2009 and won world and European titles within a year, so it was all a bit mad really." (britishathletics.org.uk, 20 Mar 2019)

CIRCUS TRAINING
She was not allowed to take part in gymnastics at school because of her visual impairment so she tried circus performing. "Trapeze is very much its own class now, not just one part of a wider circus performing class, much to my mother's relief. I did a thing at school called 'web rope', I don't think you want to see your 12 year-old daughter about 10 foot in the air been swung around on the end of a rope. I think I may have added some grey hairs to her that night. She came to one of the showcases and I think she thought, 'Oh my goodness, I thought you were doing something safe, you are clearly not'." (britishathletics.org.uk, 20 Mar 2019)