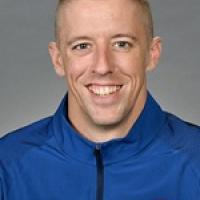 When and where did you begin this sport?
He began running in 2003. He tried competitive weightlifting and swimming before getting involved in triathlon. He competed in triathlon events for several years before running a qualification standard time in an event for Para athletics.
Why this sport?
Before his accident in 2002, he admitted that he was a frequent user of recreational drugs. After recovering from his accident, he was arrested for violating probation and sentenced to two months in jail. He realised he needed to change, and was allowed back into his mother's house on the condition that he join a gym. He quickly became involved in swimming, cycling and running. "It was just a matter of accepting the fact that I had failed, and that I needed help."
Name of coach
Loren Seagrave

In late 2011 he tore stabilising ligaments, tore the hamstring muscle, broke the fibula bone and ruptured the meniscus [knee] in his left leg. He underwent surgery and sessions in a hyerbaric oxygen chamber, and was able to walk again in January 2012. He returned to the track in time for the 2012 US Paralympic trials. He then had follow-up surgery on his left leg following the 2012 Paralympic Games. (paralympic.org, 19 Jan 2013; Athlete, 06 Nov 2019)
Sporting philosophy / motto
"I win or I learn, I never lose." (Athlete, 06 Nov 2019)
Awards and honours
He received the 2015 Triumph of the Human Spirit Award from BlazeSports America. (blazesports.org, 31 Dec 2015)
Other sports
He competed in Para swimming at the 2005 Endeavor Games in Oklahoma City, OK, United States of America, a multi-sport event for athletes with physical impairments. (oandp.com, 02 Aug 2005)
Ambitions
To compete at the 2020 Paralympic Games in Tokyo. (Instagram profile, 04 Mar 2021)
Impairment
He was involved in a motorcycle accident in 2002, which resulted in a traumatic brain injury and the amputation of his right leg below the knee. (teamusa.org, 14 Aug 2015; oandp.com, 02 Aug 2005)
Other information
PLANS AFTER TOKYO
In 2020 he spoke about the possibility of competing in different Para sports following the 2020 Paralympic Games in Tokyo. "In Paralympics, unlike the Olympics, me being 36 really doesn't matter. There are 60, 65 years old still competing, they just move on to different sports. I have been entertaining the idea of transitioning into track cycling in 2024 [Paralympic Games] and I would like to add a winter Paralympic sport, in either skeleton, bobsleigh or alpine skiing." (sportsspectrum.com, 07 Feb 2020)

RETIREMENT THOUGHTS
He considered retiring from the sport in 2019 after experiencing personal issues and going through a divorce. "I went through a pretty hard divorce about two years ago [speaking in 2018]. Everything spiralled out of control and I found myself just not really caring about life, contemplating suicide and dealing with relapse and drug addiction. In early 2019 I didn't want to keep running, I just wanted to get a regular job and fade into working a regular job. I guess God didn't see that in my plans. He kept on shutting doors and made it pretty evident to me I needed to pursue the end of my [sport] career." (sportsspectrum.com, 07 Feb 2020)

OCCUPATION
He works as a consultant for a medical equipment company. (LinkedIn profile, 06 Apr 2021)