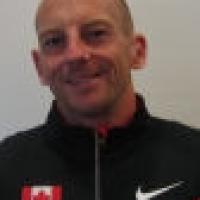 When and where did you begin this sport?
He took up para-athletics at age 20.
Why this sport?
He was inspired to take up the sport after watching the 1996 Paralympic Games in Atlanta on television.
Name of coach
Peter Eriksson [national]

He was named the Canadian Impaired Athlete of the Year in 1997, 1998 and 1999. (insidethegames.biz, 09 Apr 2016; airdrielife.com, 14 Nov 2012)
Other sports
He played ice hockey in the Canadian Western Hockey League. (airdriecityview.com, 04 Jul 2012)
Ambitions
To win a gold medal at the 2016 Paralympics in Rio de Janeiro. (thereflector.ca, 12 Mar 2015)
Impairment
He was born without his a fibula in his left leg, which resulted in the limb being amputated below the knee when he was three months old. (thereflector.ca, 12 Mar 2015)
Other information
SANCTION
On 07 April 2016 the Canadian Centre for Ethics in Sport [CCES] announced that he had been given a four-year ban from sport as the result of an anti-doping violation. On 15 April 2015 and on 28 May 2015 he submitted urine samples that tested positive for the banned substance nandrolone. The end of his suspension was set for 29 Jul 2019. (paralympic.org, 08 Apr 2016)

RETIREMENT AND COMEBACK
He quit the sport in 2008, after winning gold at the 2008 Paralympic Games in Beijing. He opened a business and built a house, but felt that no one had come close to reaching the standard he believed he had set, so he decided to get back into the sport in August 2011. (airdrieecho.com, 04 Jul 2012)

OTHER ACTIVITIES
He owns his own business named Simply for Life, a weight loss and nutritional counselling clinic, which is based in Cochrane, AB, Canada. (thereflector.ca, 12 Mar 2015)

2004 SUSPENSION
An out-of-competition test which showed trace amounts of testosterone and nandrolone meant he missed the 2004 Paralympic Games in Athens. He told reporters it was a result of a prescribed patch he was using following surgery in 2001 to remove a testicle as a result of a cancer scare. As he had been prescribed by a doctor, he could have avoided any problems by filling out a medical exemption form, but he did not do so and subsequently received a two-year ban. "I was more embarrassed about it then than I am now. Being a young guy, I wanted to keep that a secret." (airdrieecho.com, 01 Apr 2009)

LEAGUE FIRST
He was the first athlete with an amputation to be drafted into the Western Hockey League when he was chosen by the Lethbridge Hurricanes in Alberta, Canada. (airdriecityview.com, 04 Jul 2012; avenuecalgary.com, 05 Aug 2015)