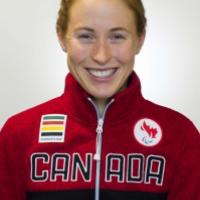 When and where did you begin this sport?
She took up Para cross-country skiing in late 2014.
Why this sport?
"I competed internationally in triathlon and wrestling, and skiing really isn't that different. Everything about competing is the same - the mental preparation, the focus, the execution. So it made it easier to move into a new sport because I've been involved in sport my whole life."
Club / Team
Sovereign Lake Nordic Club: Canada
Name of coach
Robin McKeever [national], CAN

Nicknames
Em (Instagram profile, 25 Dec 2020)
Sporting philosophy / motto
"I can't regret any moment or risk I've taken, because all of them have put me into this situation. Sport was an outlet for me, I knew how to control sport. No matter the sport, I knew it was a challenge. I strive for the lactic acid burn. It's a sick thing, but it's something that really honestly drives me." (nsnews.com, 04 Mar 2018)
Other sports
She represented Canada in both Para cross-country skiing and Para biathlon at the 2018 Paralympic Winter Games in Pyeongchang. Before her accident, she competed in wrestling and triathlon at international level. (paralympic.org, 27 Jun 2017; nsnews.com, 24 Feb 2015; SportsDeskOnline, 17 Dec 2021)
Impairment
She has ulnar nerve damage in her right arm as the result of a wrestling training accident in 2009, which dislocated her elbow and separated her shoulder. She was originally right-handed, and over time she had to learn to use her left arm and hand. "I say I have one and a half arms. It's fully there but it's just half the length. It's just stuck, bent at 90 degrees. We call it the T-Rex arm." (globalnews.ca, 03 Dec 2015; nationalpost.com, 01 Dec 2017)
Other information
FROM WRESTLING TO TRIATHLON TO SKIING
Despite the severity of her elbow injury in 2009 she initially continued wrestling, including at the Canada Games in 2009 and for more than half a year with the wrestling programme at Simon Fraser University. Eventually she realised she could no longer continue the sport, as her elbow would pop out of the joint every time she wrestled. She turned to cycling and running to cope with the frustration of not being able to wrestle. "I was trying to pursue the Olympics in wrestling but the stars didn't align. The joint was like held together with Silly Putty. It was so wiggly. No surgeon would do anything on me unless I stopped wrestling. I was just mad, and the outlet for my anger was to just go for a run. I was [also] biking, like four hours a day just watching everyone wrestle." She realised that if she learned to swim fast, she could transition to triathlon. She raced the Penticton Ironman in 2012, won her age category, and then competed at the 2012 Ironman World Championship in Hawaii, United States of America. But her arm could not hold up, and she required multiple further operations. "I was having a hard time holding my bike. I was running with one arm and swimming with one arm at that point, so I was kind of getting a little discouraged." One day while training, she met cross-country coach Jake Weaver of Hollyburn Cross Country Ski Club, whose family encouraged her into Para skiing. Three months after first trying the sport, she competed at the world championships. "It was really scary to step into the world championships that year [2015]. I had no idea how to ski. I was like, 'Um, how fast am I supposed to go?'" (nsnews.com, 04 Mar 2018)

OTHER ACTIVITIES
She and her husband Chris run Young Family Farm in Kelowna, BC, Canada, where they produce fruit, vegetables, nuts and free-range eggs. She has also served as a mentor for Classroom Champions, a Canadian charity that connects school students with athletes. (Instagram profile, 19 Dec 2021, 07 Nov 2020; classroomchampions.org, 15 Mar 2020)

FURTHER EDUCATION
She has studied for a bachelor's degree in psychology, specialising in sport psychology. (classroomchampions.org, 15 Mar 2020)