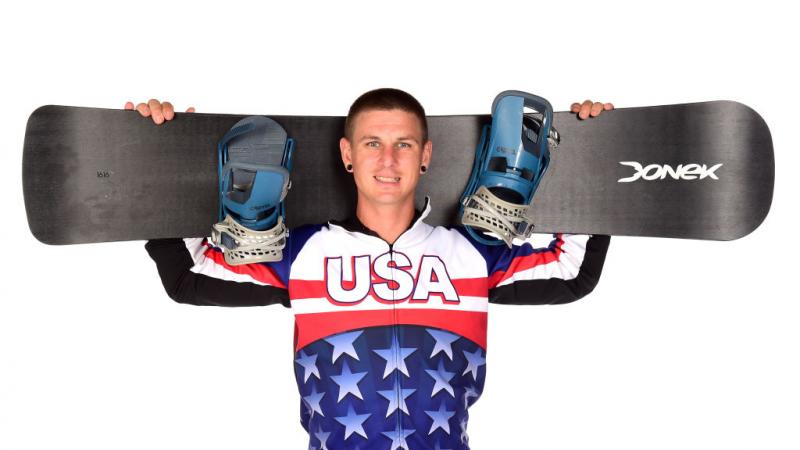 Evan Strong grew up in Maui, Hawaii, where the only ice is shaved and served in cones or pina coladas, and winter sports are surfing, skateboarding and swimming.

It is hard to believe that the former Hawaiian kid is now a snowboarding demon, a guy who is getting impatient for winter storms to start dumping fresh powder all over the Sierra Nevada and Rockies.

With the rising competition, Strong had to be at his best to land silver in the men’s banked slalom SB-LL2 at his second Paralympic Games in PyeongChang.

Strong has a history of success in his sporting pursuits and his record in snowboard-cross is no different. He is the 2012 world champion and a serial World Cup gold medallist.

At the Sochi 2014 Paralympic Winter Games, Strong stormed to a historic gold medal on the slopes of Rosa Khutor, bagging the first ever Paralympic title on the sport's debut at a Games.

But in 2014-15, he finished sixth in the final 2014-15 IPC Para Snowboard World Cup standings. He also lost out on gold to Finland’s Matti Suur-Hamari in the men’s snowboard-cross SB-LL2 at the World Championships in La Molina, Spain, and to teammate Mike Shea in the banked slalom.

In 2015-16, Strong was again slower than his two main rivals, ending third in both the snowboard-cross and the banked slalom World Cups.

The 2016-17 season offered him redemption after a below-par 2015-16. Strong won the men's snowboard-cross SB-LL2 World Cup - the first crystal globe of his career - and topped the overall rankings.

At age 17, Evans was hit by a vehicle while riding a motorcycle and had to have his left leg amputated. Having never snowboarded, Strong immediately took to the sport and has not looked back since. A beneficiary of US teammate Amy Purdy’s Adaptive Action Sports programme, Strong is a true success story on the snow and away from it, where he cycles, continues to skateboard and owns an organic restaurant with his wife. He also has a daughter, Indie.

When and where did you begin this sport?
He took up the sport in 2006 in Sun Valley, ID, United States of America.
Why this sport?
"When I was hit, I was living in Maui [in Hawaii, United States of America] so my recovery was there. One day I came across a snowboarding magazine and saw people riding down snow-covered mountains and was just so inspired. It was two years after my accident and after seeing that, I told my family I have to learn to snowboard. Second chance at life, and I have to do this because board sports were my passion. So I packed up, moved to Lake Tahoe in California and found a job at Northstar Ski Resort. Just immersed myself in the ski culture and shortly after that I got introduced to snowboard competition. It was one of the greatest rushes of my life."
Club / Team
Adaptive Action Sports: Copper Mountain, CO, USA
Name of coach
Alex Tuttle, USA; Mike Jennings
Training Regime
"I train throughout the entire day. I start with yoga, then weightlifting, then in the afternoon I do a sport or outdoor activity [skateboarding, surfing or snowboarding]."

Hobbies
Skateboarding, surfing, mountain biking. (Athlete, 10 Mar 2022)
Memorable sporting achievement
Winning gold in standing snowboard cross at the 2014 Paralympic Winter Games in Sochi. (Athlete, 10 Mar 2022)
Most influential person in career
His family, US Para skateboarder Jon Comer, and Adaptive Action Sports founders Amy Purdy and Daniel Gale. (Athlete, 10 Mar 2022; forbes.com, 23 May 2021; teamusa.org, 07 Mar 2018)
Hero / Idol
US Para skateboarder Jon Comer. (Athlete, 10 Mar 2022)
Injuries
In 2010 he broke five ribs, sustained a stage three ruptured spleen, and suffered numerous abrasions while downhill mountain biking at the Northstar Resort in California, United States of America. (strongevan.com, 17 May 2013)
Superstitions / Rituals / Beliefs
His mother reads him his astrology stars before a race. (nbcolympics.com, 26 Dec 2017)
Sporting philosophy / motto
"Mind over matter, but soul over all." (Facebook profile, 08 Feb 2018)
Other sports
He has competed in able-bodied snowboarding, Para surfing and Para skateboarding at national level in the United States of America. He has also competed in Para snowboarding and Para skateboarding at the X Games. (Athlete, 10 Mar 2022; paralympic.org, 09 Dec 2021; forbes.com, 23 May 2021; nytimes.com, 20 Mar 2018; xgames.com, 2019)
Impairment
At age 17 he borrowed his older sister Stephanie's motorcycle after he missed his lift to work. A mile from his home, a drunk driver travelling at 65mph crossed over into oncoming traffic, striking the car in front and then hitting him head-on at full speed. His left leg was amputated below the knee three days after the accident. (Athlete, 10 Mar 2022; prnewswire.com, 02 Dec 2020; teamusa.org, 01 Mar 2014; strongevan.com, 01 Jan 2014)
Other information
COMEBACK
In December 2021 he spoke about returning to full-time Para snowboard training and competition after competing infrequently in the years following the 2018 Paralympic Winter Games in Pyeongchang. "I always knew that I wanted to come back and continue racing in Para snowboarding, but I just wanted to focus my time, spend it with my family. Finding out that my wife was pregnant with our second child, I knew that I didn't want to miss as much as I did with my first kid. I wanted to really be present and not miss so much as I did with my first kid. But now that she's almost three and the Paralympic Games are coming up, it was time to come back." (paralympic.org, 09 Dec 2021)

EYES ON ITALY
He plans to compete at the 2026 Paralympic Winter Games in Italy. “I am 35 now [speaking in 2022] and feeling better than I ever have. So much of my sport has to do with strategy and once you find your competitive edge - and you put in a lot of your back work for strength and conditioning - once you find your competitive edge, if you stay healthy, you can compete in this for a long time. All of my [Paralympic Winter] Games I have been to thus far have all been in Asia, so it'd be cool to have a complementary, opposite experience. I will be 39 for those Games [in 2026 in Italy], but that doesn't phase me that much.” (mauinews.com, 25 Feb 2022)

ABLE-BODIED PUSH
He has competed in able-bodied snowboarding, and in 2022 he spoke about his passion to compete in the able-bodied World Cup circuit. “I still love racing in able-bodied boarder cross and I do it whenever I can. But unfortunately the last couple years I had to focus in on what I could accomplish, so unfortunately that's been on the backburner, but as long as I keep racing I will keep doing the able-bodied races because I want to race those able-bodied World Cup courses because that looks like such more my fit. It's always in the back of my mind, it's always been a goal of mine, so that's not going to change." (mauinews.com, 25 Feb 2022)

RETIREMENT PLANS
He lived in Maui, HI, United States of America from 1994 to 2006. He plans to return and settle there when he retires from competitive sport. “Maui's always going to be home in my heart. And I know once my snowboarding career is over, I know where I want to be. I dream pretty much nightly of being in the ocean, surfing on Maui.” (mauinews.com, 25 Feb 2022)