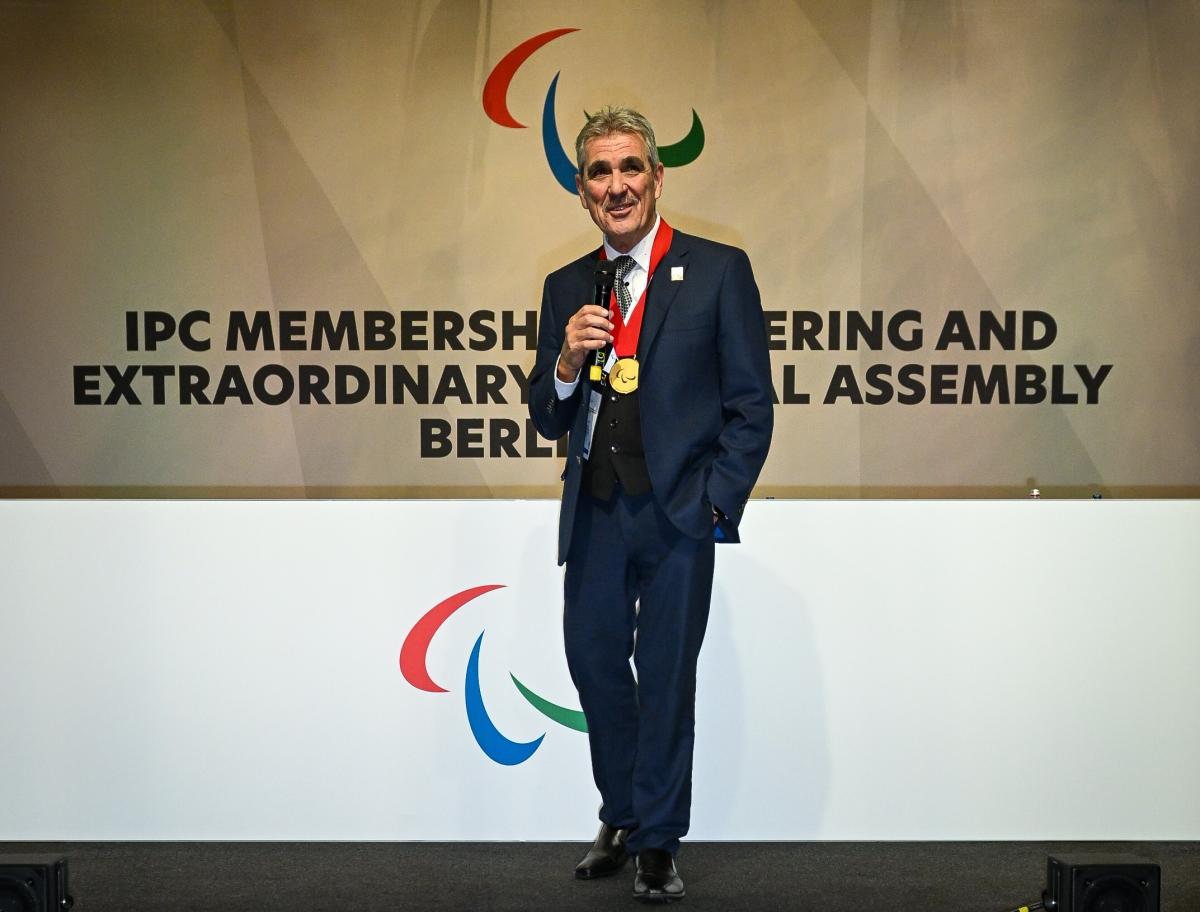 Paul Bird has been part of the Paralympic Movement for more than four decades in various roles, including as an athlete at two Paralympic Games.
ⒸRalf Kuckuck/IPC
By IPC

Bird has been at the frontline of the Paralympic Movement for more than 40 years. He represented Australia in Para swimming and Para athletics at the 1980 and 1984 Paralympic Games, winning gold and silver medals.

Off the field he has excelled as an administrator, as Australian Team Chef de Mission or Deputy Chef de Mission at five Paralympic Games, a Paralympics Australia Board Member (1993-2014) and as President of OPC, a role he has served in since December 2005.

We caught up with Bird to discuss the honour, his attitude towards his impairment, how the Paralympic Movement has evolved to better support athletes, and his hope that the Brisbane 2032 Paralympic Games will be a watershed moment for Para sport across Oceania.

IPC: What does it mean to you to receive the Paralympic Order?

Paul Bird: It’s a feeling of extreme honour. I was very humbled to be nominated, let alone to receive an acclamation from everyone. There’s only four Australians who have received the Paralympic Order, so I felt quite blessed, especially as I know what some of those people have done.

In the bigger IPC family picture, there are so many luminaries on the Paralympic Order list that I have looked up to over the years. The presentation from Andrew was quite emotional because it was in front of my peers and the Movement.

President of the Oceania Paralympic Committee receives the Paralympic Order from @parsonsandrew at the IPC Membership Gathering Berlin 2022.

Congrats to Paul Bird who has been at the frontline of the Paralympic Movement for more than 40 years. 👏 pic.twitter.com/X736AtRcCP

IPC: You acquired your disability aged 18. How did Para sport change your life?

PB:  My accident was 50 years ago next month (December 1972), and I treat it as the best thing that happened to me, simply because I wouldn’t be the person I am now.

Para sport created a lot of opportunities for me. It was difficult to see that to begin with, but without doubt it’s benefitted my career. I was an educationalist before I went into business and the skills of understanding people and understanding everyone that you pick up in the Paralympic Movement have certainly helped me in what I have done and where I have gone.

IPC: You have been involved in the Paralympic Movement for over four decades, several years before the IPC even existed as an organisation. What changes have you seen in that time?

PB: If I was an athlete right now, I would feel so blessed to be part of the Movement because it has changed so dramatically for the better. When I first came into Para sport in the 1970s, we didn’t have any profile and the attitude was "there’s a group over there with a disability". We were an add-on.

The feeling seemed to be that disability sport was very separate from other sport. I think in that alone I’ve seen a fundamental shift in attitudes towards inclusion. In fact, inclusion wasn’t even considered a word when I first became involved in Para sport.

When I look at where I have come from and where our athletes are now, I have seen an incredible change as it’s moved from a medical model to a sport model. I’ve seen acceptance in broader communities, and I’ve seen an equality which wasn’t there before. I’m hearing the word "everyone" more, so it’s not about "those people" or disability. It’s everyone now. That’s the biggest change.

IPC: You were Australia’s Chef de Mission for the Sydney 2000 Paralympic Games. Before the Games you successfully advocated for team members to no longer be defined by their impairment and set about bringing Paralympic athletes together as "one team" of athletes. What was the thinking behind that?

PB: In the lead up to Sydney 2000, I’d been involved in Paralympic teams since 1980, but those teams were segregated. So, in my first Games in 1980, we had four separate teams. We had a wheelchair team, an amputee team, a blind team, and a cerebral palsy (CP) team. We all wore the same uniform, but we were separated. We had our own section manager, we stayed in our own separate area in the accommodation and there was no connection with anyone.

It was always wheelchair focused too, so only wheelchair athletes were allowed to march in the Opening Ceremony. The rest of us sat in the stands because the thinking at the time was "you’re the new guys, these Games are about wheelchair sport".

IPC: You’ve been President of the Oceania Paralympic Committee for 16 years. What do you feel like you’ve achieved in that time, and what does the future hold?

PB: It’s been a battle, with one step forwards and two back sometimes. The main reason for that is lack of funding and resources. We can create an opportunity, but we don’t have the funding and everything falls apart. That has been a challenge and so has identifying what we need to do. We finally decided that if we didn’t invest in coaches then nothing was going to happen. That’s become our focus and we’re gradually starting to get gravitas around that, starting to build an opportunity.

I was also getting to the stage where I thought it might be a good time to step away. But all of a sudden, we now have Brisbane 2032, and it offers an incredible catalyst for change in our region.

I’m looking at the next decade with renewed enthusiasm because our goal will be to have 17 countries at these Games, which means eight new NPCs. If I can somehow be part of a 48 per cent increase in our region and a different model of membership around combining with their NOC, then that will be a defining legacy.