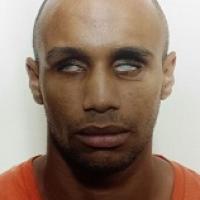 When and where did you begin this sport?
He took up athletics in 2003.
Why this sport?
He discovered athletics after playing football [5-a-side] and goalball.
Club / Team
Nauru: Brazil
Name of coach
Fabio Dias de Oliveira Silva [personal]

Hobbies
Supporting Brazilian football team Flamengo. (globoesporte.globo.com, 06 Nov 2019)
Injuries
He sustained a series of injuries while preparing for the 2008 Paralympic Games. (paralympic.org, 17 Feb 2016)
Awards and honours
A school in the Tanque neighbourhood of Rio de Janeiro, Brazil, was named after him in recognition of his performance at the 2016 Paralympic Games in Rio de Janeiro. A second school, in the Taquara neighbourhood, was also named after him. (paralympic.org, 04 Oct 2016; suburbiorj.com.br, 30 Sep 2016; prefeitura.rio, 29 Sep 2016)

He was named the 2015 Para Athletics Competitor of the Year by the Brazilian Paralympic Committee [CPB]. (cpb.org.br, 09 Dec 2015)
Famous relatives
His wife Viviane Soares is also a Para athlete. She claimed bronze in the T12 100m at the 2019 World Championships in Dubai, United Arab Emirates. (SportsDeskOnline, 10 May 2020; globoesporte.globo.com, 06 Nov 2019)
Impairment
He has no vision as the result of congenital glaucoma, cataracts, and a detached retina. He began losing his eyesight at age six. (cpb.org.br, 01 Sep 2019)
Other information
SPORTING COUPLE
In 2017 he married Brazilian Para athlete Viviane Soares. "We are together all the time. It's funny because I can't see and I can still tell her what she can improve on. She, with a little vision, also tells me what I am not doing right." (globoesporte.globo.com, 06 Nov 2019)