IPC highlights from the first 25 years 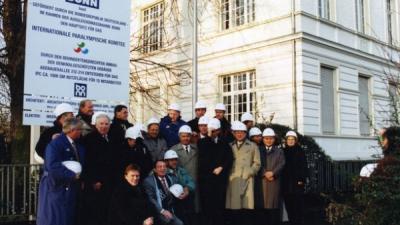 Historic photo of members of the IPC

A lot has happened since the International Paralympic Committee was formed on 22 September 1989. Check-out the timeline below to see some of the highlights of the last 25 memorable years.

• The IPC is created on 22 September 1989 in Dusseldorf, Germany with Canadian Bob Steadward as President. Its aim is to be the only world multi-disability organisation with the right to organise the Paralympic Games and multi-disability world Games, as well as World Championships.

• More than 200 participants from 42 countries are involved in the meeting.

• An Executive Committee was commissioned to review the recommendations of the inaugural General Assembly with regard to the IPC structure and to develop a constitution for approval by the General Assembly in Groningen, 1990.

• Groningen, the Netherlands, stages the second IPC General Assembly, during which the basis for the first IPC Constitution was approved.

• First Athletes Committee elected, and its chairperson Martin Mansell, becomes a member of the Executive Committee.

• Set up of IPC Sport Technical Committees is initiated.

• The General Assembly adopts some further amendments to the constitution and IPC is registered in Belgium as an international non-profit organisation, having its seat in Brugge.

• The Barcelona 1992 Paralympic Games are a huge success. Featuring 3,001 athletes from 83 countries competing in 16 sports they attract 1.5 million spectators and act as a platform for future Games growth. They are the final Games organised by the ICC.

• On 25 March 1993 in Larnaca, Cyprus, the ICC holds its last meeting and passes on the torch to IPC.

• At the fourth IPC General Assembly in Berlin, Germany, the NPCs of Republic of Guinea, Slovakia, Slovenia, Moldavia, Czech Republic, Croatia and Uruguay have their membership approved.

• The first VISTA sport science conference is staged and held in Jasper, Canada.

• Launch of the new IPC logo with 3 tae-guks (based on the 5 tae-guks logo used at the Seoul 1988 Paralympic Games).

• The Lillehammer 1994 Winter Paralympics are the first to fall under the responsibility of the IPC. A total of 471 athletes from 31 countries compete and ice sledge hockey makes its Paralympic Winter Games debut. Sweden win gold after a 1-0 sudden-death victory over Norway.

• CISS withdraws from membership in the IPC.

• A congress was held just prior to the General Assembly to discuss the future of the IPC. As a result the General Assembly elected a Task Force to assess the IPC’s efficiency, structure, roles and responsibilities. The mandate included consideration to the role and responsibilities of the IPC and to the question whether IPC could effectively co-ordinate and govern Regional and World Championships.

• More than 3,200 athletes from 104 countries compete at the Atlanta 1996 Paralympic Games and, on home soil, the USA top the medals table.

• The General Assembly considered the recommendations of the Task Force and agreed to a slimmed down Executive Committee. Within the new IPC governance structure an elected Management Committee would take up the day-to-day operational role which would be overlooked by the Executive Committee that included Regional and IOSD representation as well as winter and summer sports representation.

• The Task Force recommended to redefine the role of the IPC with a more narrow focus on the Paralympic Games and the IOSDs dealing with grass root development but also recommended more joint strategies, including a partnership with the IFs and the IOC.

• The General Assembly confirms its support to the selection of the city of Bonn as new IPC Headquarters.

• Sports have for the first time voting rights at the General Assembly.

• More than 150,000 spectators attend the Nagano 1998 Paralympic Winter Games highlighting the growing popularity of the event. A total of 561 athletes from 31 countries compete in five sports. Norway top the medals table claiming 40 medals, including 18 golds.

• Following the IPC being dissolved in Belgium and all assets being transferred to Bonn, IPC is registered in Germany and acts under German law.

• The IPC Sports Council holds a strategic planning meeting and agrees to focus on i) the growth of Paralympic Sport by increasing the number of athletes and nations while improving the athletic performance, ii) enhancing the quality of the sport technical operations/administration and iii) ensure diversity in Paralympic Sport.

• Pop princess Kylie Minogue opens the Sydney 2000 Paralympics, a Games that attracted 1.2 million spectators and cumulative TV audience of 300 million. Australia topped the medals table and the USA were the winners of the first wheelchair rugby gold medal.

• The first IPC-IOC agreement is signed during the Sydney Games by IOC President Samaranch and his IPC counterpart Steadward.

• The closer relationship between the IOC and IPC led to the organising committee of the 2004 Athens Paralympic Games agreeing not to levy any entry fee for Paralympic athletes, which was applied for the first time and a major break-through in offering equal services to Olympic and Paralympic athletes.

• A Strategic Planning Congress in Kuala Lumpur, Malaysia proposes a review of the IPC organisational structure.

• The IPC Women in Sport Committee and Commission for Athletes with severe disabilities is formed.

• At the 115th IOC Session, Sir Philip is elected an IOC Member.

• The IPC’s mission “To enable Paralympic athletes to achieve sporting excellence and to inspire and excite the world” is launched.

• The IPC Governing Board approves a classification strategy which recommends the development of a Universal Classification Code.

• The IPC-IOC Agreement is adjusted. The amendment ensures that Organising Committees for the Olympic and Paralympic Games (OCOGs) in 2008, 2010 and 2012 will pay the IPC a certain amount of money for broadcasting and marketing related to the respective Paralympic Games.

• A cumulated global TV audience of 1.8 billion watch the Athens 2004 Paralympic Games. Judo and women’s sitting volleyball make their Games debut and at the Closing Ceremony, the Agitos, the new symbol of the Paralympic Movement, is launched.

• Cairo, Egypt, stages an IPC Extraordinary General Assembly. It adopts a new IPC Constitution and new nomination and election procedures for the Governing Board which will replace the Executive Committee.

• It is decided that the Governing Board, to be elected in 2005, will be composed of 14 members, 12 of whom are elected directly by the General Assembly. The other two will be an athletes’ representative and the Chief Executive Officer.

• In addition to the NPCs and IOSDs, International Federations (IFs) and Regional Organisations are made eligible to become full members of the IPC. Furthermore, the new IPC structure includes four Councils and 12 Standing Committees.

• The IPC Middle East Region is merged into the IPC Asia Region, changing the regional structure of the IPC from six regions to five.

• Beijing, China, hosts the 12th IPC General Assembly and a record 102 members attend. Sir Philip is re-elected IPC President, Miguel Sagarra is voted Vice President and a new governing body is also chosen. The meeting heralds the culmination of the IPC’s strategic restricting process that was launched in 2001.

• International Paralympic Day is organised by the IPC for the second time in Bonn. Thousands of people witness sport demonstrations.

• The IPC management team in Bonn grows to 20 full-time employees.

• In November, the first ever Paralympic Awards are presented honouring achievements from the Paralympic Games held the previous year. The awards will be held biannually.

• Wheelchair curling makes its debut at the Torino 2006 Paralympic Winter Games and Canada are the first gold medal winners.

• The IPC launches ParalympicSport.TV, an online TV channel, during the Games. It attracts nearly 40,000 unique viewers from 105 nations.

• Para-equestrian is the first IPC sport to transfer governance and be integrated within its able bodied counter-part, the Federation Equestre Internationale (FEI).

• The IPC’s revenues break EUR 5 million for the first time.

• In June, the IOC and the IPC sign a further co-operation extension covering the Sochi 2014 and the Rio 2016 Games.

• The IPC Classification Code is approved by the General Assembly and published. It helps support and co-ordinate the development and implementation of accurate, reliable and consistent sport focused classification systems, and to detail policies and procedures common to classification in all sport.

• For the first time, the Parapan American Games are held in the same city and same venues as the Pan American Games. Rio, Brazil, welcomes 1,132 athletes from 25 countries.

• High jumper Hou Bin climbs a rope using just his arms in the Birds Nest Stadium to light the Paralympic Cauldron during the Beijing 2008 Paralympic Games Opening Ceremony. The Games are a spectacular success. Rowing makes its Paralympic Games debut as do the NPCs of Burundi, Gabon, Georgia, Haiti and Montenegro.

• Highlighting the growth of the Paralympic Games, the IPC creates its first Paralympic Hospitality Centre for corporate business partners, members and guests.

• The IPC Governing Board approves a new Anti-Doping Code.

• The first version of the IPC Sport Data Management System is completed to support the effective management of athlete date. The IPC Sport Athletes Licensing Programme is also launched for all IPC Sports.

• The IPC celebrates two major milestones – its 20th anniversary and 10th year of being based in Bonn.

• Sir Philip is re-elected President, Australian Greg Hartung becomes Vice President and the membership votes in a new Governing Board. The IPC membership decides in favour of the re-inclusion of athletes with an intellectual impairment in IPC sanctioned competitions, including the Paralympic Games.

• The process of complying with the IPC Classification Code is initiated through a self-audit process. A total of 157 NPCs, four regions, three IOSDs and 10 IFs sign the Code for acceptance.

• The Organisational Development Initiative (ODI) is launched and aims to build the capacity and efficiency of IPC members.

• In partnership with the World Academy of Sport, the IPC Academy is launched to provide educational opportunities for all within the Paralympic Movement.

• Bob Balk is elected Chairperson of the IPC Athletes’ Council.

• The IPC Governing Board decides to increase to 22 the number of sports in the Rio 2016 sports programme with the inclusion of para-canoe and para-triathlon.

• The Paralympian, the official magazine of the Paralympic Movement, is relaunched with a new award winning look.

• In response to the growth of social media, the IPC launches two Facebook groups, a generic IPC group and one for IPC Swimming.

• For the first time, the public is invited to vote for the IPC Athlete of the Month online.

• The IPC management team in Bonn grows to 50 people.

• The IPC and IOC sign a new co-operation agreement which increases the amount of financial support to the IPC and guarantees the Paralympics will be staged in the same city and venues as the Olympics through until Tokyo 2020.

• #Paralympics is the No.1 trending sporting event of the year in Great Britain and visitors to the newly relaunched www.paralympic.org increase by 500 per cent year-on-year.

• The Agitos Foundation is launched. It aims to be the leading global organisation developing sport activities for people. with an impairment as a tool for changing lives and contributing to an inclusive society for all.

• The IPC’s revenues exceed EUR 10 million for the first time.

• The IPC launches the Ones to Watch initiative which aims to raise the profile of leading athletes in each Paralympic sport.

• The IPC moves into a second building in Bonn as the workforce grows to 66 employees.

• In Athens, Greece, Sir Philip is elected IPC President for a fourth and final term at the 16th IPC General Assembly and Brazilian Andrew Parsons wins the race to become Vice President.

• For the first time ever, US broadcaster NBC sign up to broadcast both the Sochi 2014 and Rio 2016 Paralympic Games following in the footsteps of Channel 4, EBU, NHK and multiple other broadcasters.

• Each of the eight IPC Paralympic sports publish a Strategic Plan.