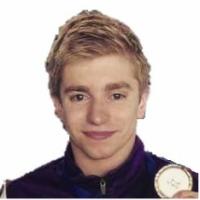 When and where did you begin this sport?
He began swimming at age seven.
Why this sport?
His mother, who also has osteogenesis imperfecta, took him and his sister to swimming lessons in order to channel their high energy levels, and because it was the safest sport for their condition. "I remember I started competing when I was about 11 years old and I realised that, if I started training, I could win these competitions. I just love winning."
Club / Team
Loughborough University: England
Name of coach
Gareth McNarry [club]; Rob Aubry [national], GBR

Memorable sporting achievement
Competing at the 2012 Paralympic Games in London. "London was really special for me because it was only 20 minutes from where I grew up, and having my friends and family there among the 17,500 in the crowd made the home Games a really special thing to be a part of." (britishswimming.org, 12 May 2022)
Hero / Idol
US swimmer Michael Phelps. (papworth.org.uk, 22 Aug 2013)
Famous relatives
His older sister Emma, who also has osteogenesis imperfecta, has represented Great Britain in Para swimming. She competed at the 2012 Paralympic Games in London, and won five medals [two silver, three bronze] at the 2011 European Championships in Berlin, Germany. (SportsDeskOnline, 11 May 2022; paralympic.org, 01 May 2017; paralympics.org.uk, 27 Aug 2012)
Ambitions
To compete at the 2022 Commonwealth Games in Birmingham, England. (britishswimming.org, 12 May 2022)
Impairment
He has osteogenesis imperfecta, more commonly known as brittle bone syndrome. (thesun.co.uk, 28 Aug 2012)
Other information
RETIREMENT AND RETURN
After retiring from Para swimming in December 2018, he chose to return to the sport in order to compete at the 2022 Commonwealth Games in Birmingham, England. "It's a really strange one, because obviously I'd walked away and started off my career, then COVID came along and put the brakes on everything. It was then they announced that Birmingham 2022 [Commonwealth Games] was going to have an S10 event in it, and I'd never swam at a Commonwealth Games so I was like, 'Oh, do you know what, I feel I'm giving that a go'. There were lots of other things going on with my condition, I get a bit of pain and so I needed to get back to training something because that helps manage my condition. I had this target for the Commonwealth Games, and I'd recently got more hours at a job in Loughborough [England] so it felt like it was all just coming together, I might as well be in Loughborough, and if I'm in Loughborough, I might as well train." (britishswimming.org, 12 May 2022, 20 Dec 2018)

SWIMMING SIBLINGS
His older sister Emma also has osteogenesis imperfecta, and both siblings have a history of injuries. "I've broken all four limbs, several times. I ripped a bone from my elbow with my tricep being too strong. I did the same with my knees. I've smashed my ribs and have my spine fused with metal rods down it. If you do something messing about, the chances are that you'll break something, but sod's law says that Em and I break stuff just when doing very little. You just learn to cope with the anxiety ahead of a championships. You just make sure you don't take silly risks." (standard.co.uk, 30 Jun 2011)

OCCUPATION
He works as a performance lifestyle and anti-doping coordinator at Loughborough University in England. He has previously worked as a performance services officer at the British Paralympic Association, and in multiple strength and conditioning roles, including with English professional rugby union [15-a-side] team Leicester Tigers. (LinkedIn profile, 05 May 2022; britishswimming.org, 12 Mar 2022)

FURTHER EDUCATION
He has earned a master's degree in musculoskeletal sports science and health from Loughborough University in England. He is also a UK Strength and Conditioning Association [UKSCA] accredited coach, and a UK Anti-Doping [UKAD] accredited educator. (Twitter profile, 08 May 2022; LinkedIn profile, 05 May 2022)