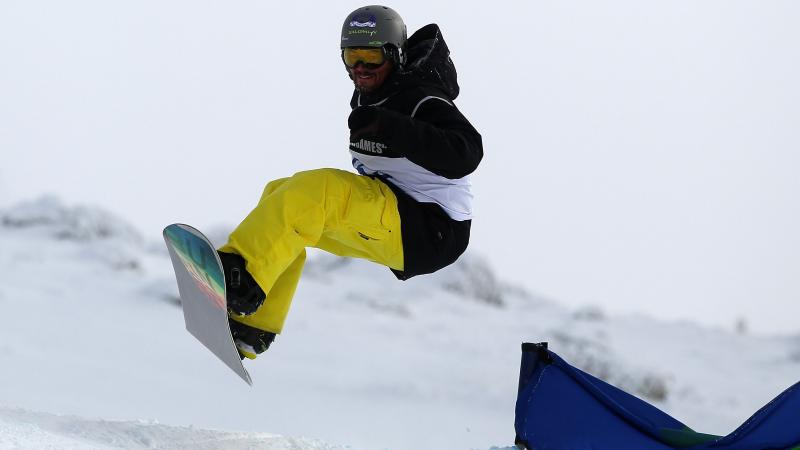 He broke several ribs in February 2012. (keithgabel.com, 02 May 2012)
Sporting philosophy / motto
"If you want to go big, don't think little." (Athlete, 05 Mar 2022)
Awards and honours
In 2014 he was presented with a History-Maker Award by the state of Utah in the United States of America. (Athlete, 10 Feb 2018)
Famous relatives
His wife Heather Gabel [nee Short] has worked as a gymnastics coach at Red Brick Center in Aspen, CO, United States of America. (rfweeklyjournal.com, 23 Jan 2020; Heather Roqueza Gabel Facebook profile, 20 Jul 2019)
Ambitions
To win gold at the 2022 Paralympic Winter Games in Beijing. (aspentimes.com, 01 Mar 2022)
Impairment
In 2005 an industrial accident resulted in his foot being crushed by more than 2000 pounds of hydraulic pressure for over 15 minutes. Following four blood transfusions, a blood clot in his left lung and multiple operations, his left leg was amputated below the knee. "If you would've told me, that first day [after losing his leg] would turn into me winning the X Games [in 2015], me going to Sochi [in 2014] and competing in the Paralympics, I would've probably laughed in your face. Losing my leg was one of the worst things that ever happened to me. But it was also one of the best. You would never know how strong you are, what you're capable of until you're put through that circumstance. The quality of my life is better in all respects." (Vita Brevis Films YouTube channel, 07 Mar 2016; Athlete, 20 Nov 2013)
Other information
COMPLETING THE SET
He is competing at his third edition of the Paralympic Winter Games at Beijing in 2022. Having won bronze in snowboardcross at the 2014 Games in Sochi and silver four years later in Pyeongchang, he is looking for gold in 2022 to complete the set. "I wasn't 100% sure I would go for a third [Games], and the stars aligned, and I was able to continue to compete. I've been really fortunate to make this a career and have the backing that I've had and the support from my family and loved ones. In Beijing, my goal is gold. I want the gold. I'm hungry, I'm ready for it, I've trained my butt off. This is 12 years in the making for me." (aspentimes.com, 01 Mar 2022)

FRIEND DEDICATION
He dedicated his two titles at the 2021 World Cup Finals in Colere, Italy, to Dutch Para alpine skier Bibian Mentel-Spee, who died in the days leading up to the competition. "Losing Bibian was really tough for me. We grew close over the years and I consider her and [her husband] Edwin two of my dearest friends. To me it almost felt like she was waiting for us all to be together to finally let go and [in] some ways having everyone together made it a little easier. Before the race started, I went and took a few minutes by myself and just said a little prayer to her, thanking her for her tireless efforts for our sport and asked her to look over all the riders and keep us safe. I'd like to dedicate my win to her as I personally know how hard she worked for the athletes. My goal is to continue that legacy and advocate for the athletes and the sport as a whole. I want to help this thing we call Para snowboarding be around long after I'm gone." (insidethegames.biz, 02 Apr 2021)

TATTOO
He has a tattoo on his right leg of a band of stitches that makes it look as if his leg has been cut off and sewn back on. "Ironically, I actually got this tattoo a few years before I lost my other leg. My amputation is about an inch lower than the placement of the tattoo but on my left leg. The meaning of this tattoo is that it doesn't matter what happens to me, you could cut my leg off and I'll still bounce back. I guess the universe wanted me to put my money where my mouth was." (teamusa.org, 14 Jun 2013)

OCCUPATION
He has worked as a programme manager for the Semper Fi Fund, a non-profit organisation that offers assistance and rehabilitation programmes to wounded US combat veterans. Prior to his accident, he operated heavy machinery for an oil and gas drilling and exploration company headquartered in Denison, TX, United States of America. (LinkedIn profile, 01 Jan 2020; Vita Brevis Films YouTube channel, 07 Mar 2016)

CHARITY WORK
He has served as an ambassador for Team for Tomorrow, a community outreach programme in the United States of America. "I love doing this kind of stuff because I'm a product of community outreach programmes. When I lived with my mother in Oregon, we were super poor. We ate at soup kitchens, we were in and out of homeless shelters. I even stood in line with my mother for days on end during Christmas time for [US Marine Corps charity programme] Toys for Tots just so my siblings could get a decent present. So to be able to give back to the community is an honour for me." (highfivesfoundation.org, 29 Jan 2015; athletego.com, 09 Oct 2013)

BUSINESS
He and his wife Heather opened a coffee shop named Coffee Connections in Aspen, CO, United States of America. They have dreamt of owning a coffee shop after they both met at one and Heather had a background in the industry. "It's like a dream come true. Everybody makes a connection through coffee at some point. Coffee is what brings everybody together. I was fortunate enough to meet my wife through coffee.” (Athlete, 05 Mar 2022; aspentimes.com, 14 Ju