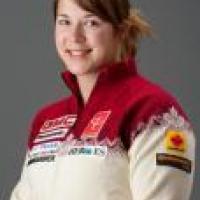 When and where did you begin this sport?
She began the sport at age 19 in Edmonton, AB, Canada.
Why this sport?
"After my accident this seemed like the best competitive sport scenario for me, given my passion for skiing and snowboarding prior to injury."
Name of coach
Jean-Sebastien Labrie [national], CAN

In April 2013 while competing at a Paralympic Test Event in Sochi, Russia, she crashed and injured both of her arms, and had to undergo surgery on her collarbone. (kimberlyjoines.com, 12 May 2013)

She missed the whole of 2010 because of a broken hip, and three months of the 2009 season because of broken ribs. She was out for three months in 2005 because of a broken femur, which followed a four month break in 2004 because of a fractured tibia. In 2002 she broke both her ankles and a tibial plateau in a crash which kept her out for five months. (Athlete, 04 Apr 2011)
Sporting philosophy / motto
"It always works out in the end. So if it isn't working out, it just isn't finished yet." (Athlete, 04 Apr 2011)
Ambitions
To compete at the 2018 Paralympic Winter Games in Pyeongchang. (paralympic.org, 26 Nov 2015)
Impairment
A snowboarding accident in 2000 resulted in paraplegia. (Athlete, 04 Apr 2011)
Other information
PERSONAL BATTLE
She has admitted to battling depression throughout her career. (canada.com, 06 Mar 2014)

SPEED TO SKILL
She stopped competing in skiing's speed events and switched to the more technical events in a bid to reduce her risk of injury and prolong her career. "I've never broken a bone in a technical event. As soon as I stopped skiing speed, it was like a huge weight was lifted off my shoulders and I was generally just relaxed and positive." (canada.com, 06 Mar 2014)