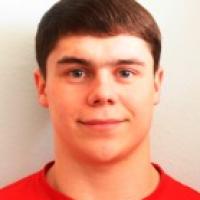 When and where did you begin this sport?
He began powerlifting while in grade nine at school in Izhevsk, Russian Federation. He took up the sport seriously while at university in Moscow.
Why this sport?
After walking for 15 years with crutches, he felt that the rest of his body was not as strong as his arms, so he set a goal to strengthen his entire body. After winning his first competition, the Championship of Moscow, he was noticed by the Russian national para-powerlifting team coach.
Club / Team
Moscomsport Adaptive Sports School: Moscow, RUS
Name of coach
Yury Peganov, RUS, from 2004

Hobbies
Fishing, playing musical instruments, surfing. (Athlete, 24 Apr 2016)
Memorable sporting achievement
Winning first place at the 2007 European Junior Championships, and bronze at the 2013 European Championships in Aleksin, Russian Federation. (Athlete, 24 Apr 2016)
Most influential person in career
Coach Yury Peganov. (Athlete, 29 Mar 2014)
Superstitions / Rituals / Beliefs
He does not step over the barbell or hang anything on it during training sessions and competitions so as not to "upset it." (1tvam.ru, 03 Jun 2012)
Sporting philosophy / motto
"Don't fear anything, believe in yourself and your strength." (Athlete, 29 Mar 2014)
Awards and honours
He holds the title of Master of Sport in the Russian Federation. (Athlete, 24 Apr 2016)
Ambitions
To compete at the 2017 World Championships in Mexico City, Mexico. (Athlete, 24 Apr 2016)
Impairment
As a child he was diagnosed with fibrodysplasia in his right thigh bone. He underwent eight surgeries to fix the bone with titanium, and as a result uses a walking stick to assist his mobility. (1tvam.ru, 03 Jun 2012)
Other information
SPORTS ADMINISTRATOR
From 2009 to 2013 he worked in the Russian Ministry of Sport as a leading specialist on interaction with people with impairments, and dealt with many Russian national Paralympic teams. In 2013 he became chief of the Russian para-powerlifting team in the Ministry's Centre of Sports Preparation. (Athlete, 24 Apr 2016; 1tvam.ru, 03 Jun 2012)

FURTHER EDUCATION
In 2012 he graduated from the Moscow State Academy of Physical Education in the Russian Federation. (1tvam.ru, 03 Jun 2012)