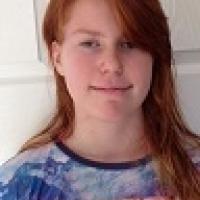 When and where did you begin this sport?
She began swimming at primary school.
Why this sport?
She took part in a Para swimming assessment, which was being held by the Gloucester County Council in England. A Norwegian Paralympian identified her as having talent and she took up the sport competitively. "I used to do karate, but I gave up. It was a choice really. If I wanted to do swimming or karate, I chose swimming because my lower half wasn't as good as my top half. With swimming it's better, because I can't hurt myself in the water."
Training Regime
She trains for 12 hours a week.

Hero / Idol
British Para swimmer Charlotte Henshaw. (sportsaid.org.uk, 03 Apr 2014)
Awards and honours
She received the Para Sports Performer of the Year award at the 2013 Gloucester Citizen and Gloucestershire Echo Sports Awards in England. (efds.co.uk, 24 Nov 2013)
Impairment
Her legs were amputated below the knee after she contracted a strain of meningitis called meningococcal septicemia at age four months. Since the initial surgery, she has had more than 40 operations on the lower part of her body. (gofundme.com, 28 Feb 2013; thisisgloucestershire.co.uk, 07 Nov 2012)
Other information
OTHER ACTIVITIES
In November 2016 she was featured in an episode of the British television programme 'Countryfile'. During the show she took part in a walk across the Eskdale Valley in England in aid of the BBC Children in Need charity. "What a great experience the ramble was. It was really amazing. I found it particularly tough in places, but I just kept on going and I'm so glad I made it." (tewkesburyschool.org, 01 Dec 2016; timesandstar.co.uk, 03 Nov 2016)

CHARITABLE FOUNDATION
The Levana Hanson Trust was setup by her parents shortly after she was born. The organisation raises money for the Meningitis Trust and the John Radcliffe Hospital intensive care children's unit in Oxford, England. (gloucestershireecho.co.uk, 23 Sep 2014; dailymail.co.uk, 2014)