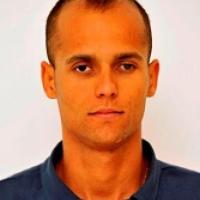 When and where did you begin this sport?
He began playing football-5-a-side in 2004. He tried goalball the following year, and switched to athletics in 2006 in Rondonopolis, Brazil.
Why this sport?
He was introduced to athletics by Brazilian Para sprinter Terezinha Guilhermina. "Knowing the final diagnosis [of his impairment] was the worst moment of my life. I started to drink. I didn't want to know anything anymore. But sports saved my life."
Club / Team
Instituto Athlon de Desenvolvimento Esportivo: São José dos Campos, BRA

Most influential person in career
His grandmother. (mtaquionline.com.br, 08 Apr 2013)
Injuries
He sustained a tendon injury at the 2015 World Championships in Doha, Qatar. (portalr3.com.br, 30 Aug 2019)

He broke his foot in 2012, but managed to recover in time to compete at the 2012 Paralympic Games in London. (unimedparadesporto.com, 21 Mar 2015)
Awards and honours
In 2008 he was named Best Male Athlete of the Year by the Brazilian Paralympic Committee [CPB]. (globoesporte.globo.com, 11 Dec 2008)
Impairment
He lost his sight in 2003 after he sustained a detached retina in an accident at work. He lost 90% of the vision in one eye, and later a condition called chorioretinitis affected the other. He lost his vision completely in 2006. (mtaquionline.com.br, 08 Apr 2013)