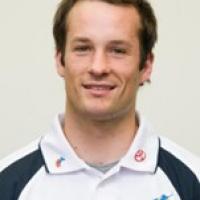 When and where did you begin this sport?
He began competing in para-skiing in 2004.
Why this sport?
He grew up skiing prior to the amputation of his legs and returned to the sport following his rehabilitation.
Handedness
Right

NUMB FEET
His father took him skiing to Thredbo, NSW, Australia, before his legs were amputated. He remembers the experience and describes the sensation of skiing with his prosthetics as like skiing with 'numb feet'. (smh.com.au, 12 Feb 2010)