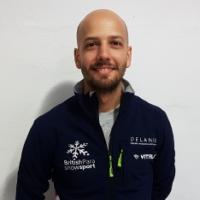 When and where did you begin this sport?
He first tried skiing in 1996 while on holiday in Soll, Austria. He began Para alpine skiing competitively in November 2012.
Why this sport?
He was active in football and rugby before his amputation, and wanted to return to competitive sport after his operation. He was inspired to take up alpine skiing after watching the 2012 Paralympic Games in London.
Name of coach
Euan Bennet [national], GBR

OTHER ACTIVITIES
He is a founding trustee of the Ewing's Sarcoma Research Trust, a charity that raises funds for research into the rare form of cancer, Ewing's sarcoma. He also has an English Football Association [FA] Level 2 coaching badge. (LinkedIn profile, 01 Apr 2016)