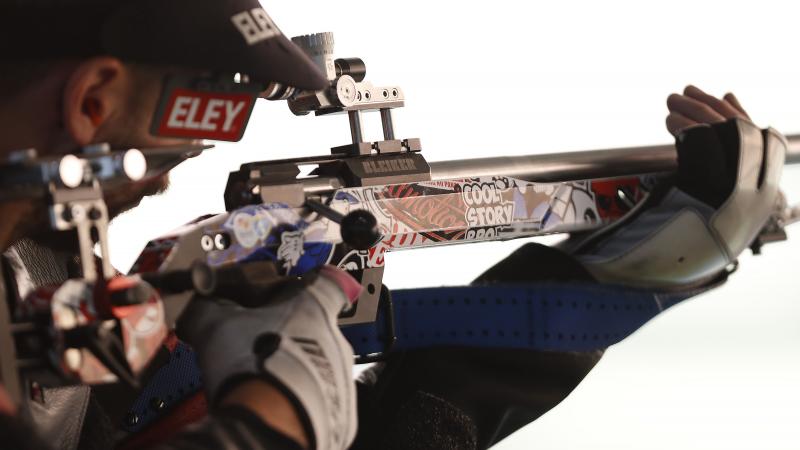 At the 2018 World Championships, Skelhon battled with Slovakian star Veronika Vadovicova for R3 (mixed 10m air rifle prone SH1) gold. It came down to the final shot, and Skelhon came up 0.7 points short of Vadovicova’s world-record win. But it was a satisfying finish after getting knocked out of the elimination round in the R6 (mixed 50m rifle prone SH1) the previous day.

His notoriety began at the Beijing 2008 Games where, sporting a distinctive red mohican, the Peterborough native hit a perfect score in R3 to win gold only two years after taking up the sport.

However, at his home Paralympic Games at London 2012, the Brit found himself up against France’s Cedric Fevre who took the crown from him by just 0.3 points to leave him with silver.

That was not the end of the story for the self-confessed perfectionist. Skelhon hit back in R6 to take an unexpected bronze.

Just over one year later, the man nicknamed “Buzal” clinched R6 gold at the 2013 European Championships in Alicante, Spain, with a new qualification and finals world-record score.

At the 2014 World Championships in Suhl, Germany, Skelhon was back to his best, winning gold in R6 with a new world record and silver in R3.

At the Rio 2016 Paralympic Games it looked like Skelhon was on track to win Paralympic gold in R6.

With a new Paralympic record in qualification he went into the final in good form. But it was not to be. Skelhon started well, placing third after the first round of shots. But by the third round a series of sub 10.0 scores meant he was eliminated, leaving China's Cuiping Zhang to take gold whilst Skelhon finished seventh.

When and where did you begin this sport?
He first tried shooting at age 11. He began competing in shooting Para sport at the 2006 Stoke Mandeville Spinal Games in Aylesbury, England.
Why this sport?
He originally practised the sport as a hobby with his father.

Nicknames
Buzal [slang for 'mate' in his hometown of Peterborough, England]. (channel4.com, 14 Oct 2010)
Hobbies
Angling. (Instagram profile, 01 Jan 2020)
Superstitions / Rituals / Beliefs
He listens to music before he competes. (paralympic.org, 17 Apr 2013)
Awards and honours
He was named the 2014 Sportsman of the Year by the Peterborough Telegraph newspaper in England. (peterboroughtoday.co.uk, 30 Jan 2015)
Impairment
He has paraplegia as a result of a car accident. (paralympic-games.2012.co.uk, 13 Jun 2011)
Other information
RETIREMENT THOUGHTS
After winning medals at the 2008 Paralympic Games in Beijing [gold] and the 2012 Paralympic Games in London [one silver, one bronze], he considered retiring from Para shooting after returning from the 2016 Games in Rio de Janeiro with no medals. "It has been difficult to even talk about what happened in Rio. I felt worse than after my accident in 2005 which put me in my wheelchair. I was depressed and had no motivation to shoot again. I was on the verge of quitting, and even after starting to train again I left many camps angry and ready to throw in the towel. As an athlete you sacrifice so much and train so hard for one competition on one day, and if that goes wrong you are screwed." (paralympic.org, 19 Jul 2017)