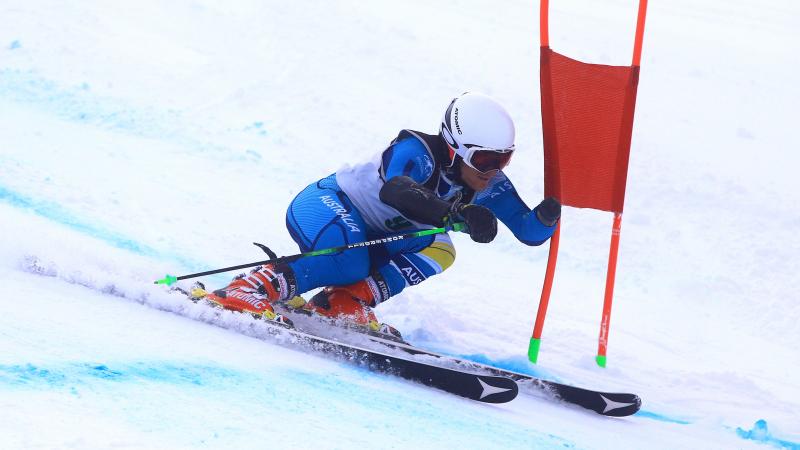 Mitchell Gourley began skiing at the age of eight, making his international debut when he was 15 years old. But he had to wait another 10 years until he could enjoy his first major achievement, when he sealed gold in the men’s super-combined standing at the Tarvisio 2017 World Championships.

With that title in the bag, the 2017-18 season presented him with a very good chance of medalling at the PyeongChang 2018 Paralympic Winter Games. But his best result was fifth in the super-combined.

On the World Cup circuit, Gourley finished in second place in the overall men’s standing World Cup in 2017-18, repeating his performance from the previous season.

He has also showed his credentials as a Proud Paralympian, being elected as Athlete Representative on the World Para Alpine Skiing Sport Technical Committee.

Born without a left forearm, Gourley lives in Montreal, Canada but is a proud skier for the Australian team.

He enjoys track cycling, trail running, cooking and climbing and has shown himself to be superstitious; confessing he always puts his left ski boot on first.

When and where did you begin this sport?
He began skiing at age eight in Mount Buller, VIC, Australia.

He suffered a wrist injury in the lead-up to the 2017 World Championships in Tarvisio, Italy. He went on to win gold in super combined at the event. (geelongadvertiser.com.au, 31 Jan 2017; skiandsnowboard.org.au, 23 Jan 2017)
Superstitions / Rituals / Beliefs
He puts on his left ski boot first. (Athlete, 17 Jun 2016)
Awards and honours
He received the Male Sportsperson of the Year Award at the 2017 Victorian Disability Sport and Recreation Awards in Australia. (alignedleisure.com.au, 22 Aug 2017)

He was named Para Snowsport Athlete of the Year for 2016 and 2017 by Ski and Snowboard Australia. (skiandsnowboard.org.au, 28 Apr 2017)
Impairment
He was born without his left forearm and hand. (abc.net.au, 24 Jun 2017)
Other information
TIME OUT
After breaking his wrist in January 2019 he took time out of the sport and decided to not compete for the 2019/20 season. "I've been doing winter seasons for 15 years straight. This is my first Australian summer since 2005. To take a winter off is scary, but it's exciting at the same time." (geelongindy.com.au, 17 Jan 2020)

OTHER ACTIVITIES
In 2015 he began serving as an athlete representative on the International Paralympic Committee [IPC] alpine skiing sport technical committee and in January 2017 he was re-elected for a further two years. "It's exciting. I'm really proud and honoured to have the chance to do it again. It's something which is really hard work but really rewarding." He has also served as the chairman of the World Para Alpine Skiing athlete advisory group. In June 2020 he was elected to the Paralympics Australia Athlete Commission. "One of the main ways I want to work with the commission is to help with how we can improve the pathway for developing athletes in winter sport here in Australia, as well as supporting their ongoing development as people, more than anything." (insidethegames.biz, 26 Jun 2020; 29 Jan 2017; paralympic.org, 27 Jan 2017)

OCCUPATION
He works as an external consultant in community engagement at the Australian Institute of Sport. (LinkedIn profile, 01 Oct 2020)