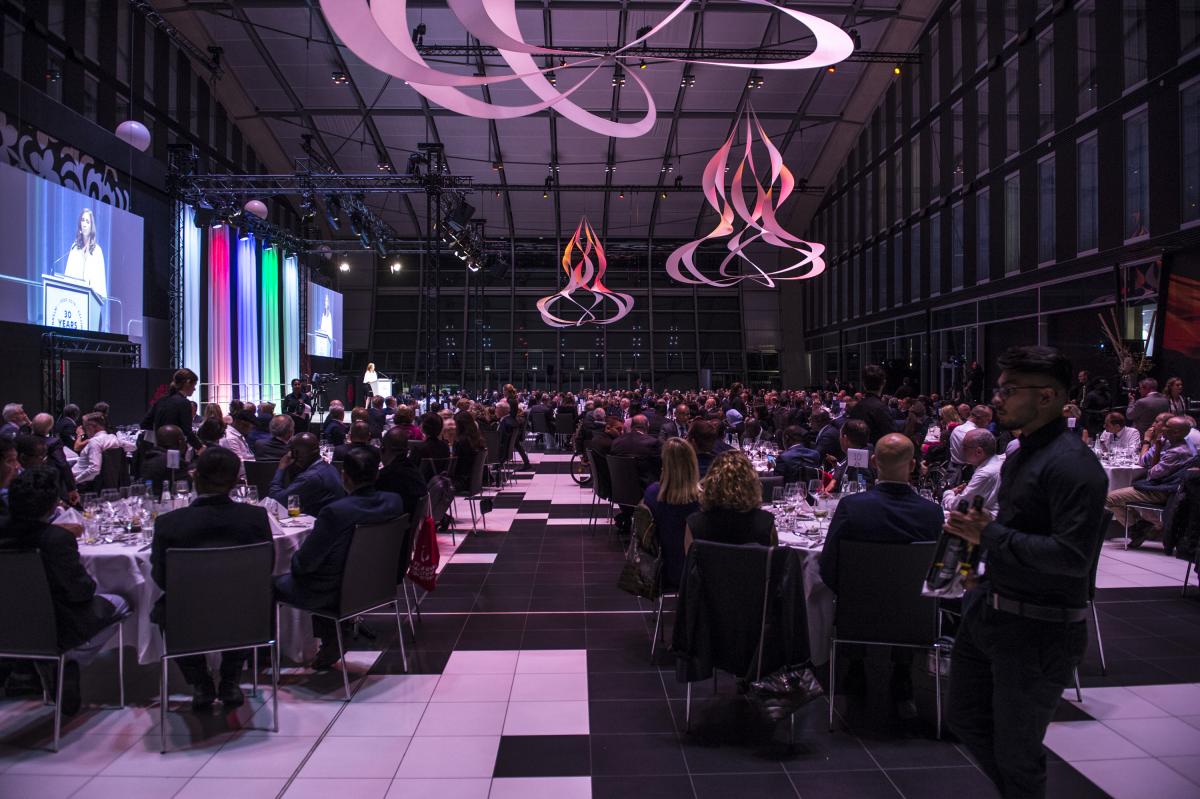 The great and good of the Paralympic Movement gathered in Bonn, Germany, on Thursday evening (24 October) to celebrate the 30th anniversary of the International Paralympic Committee (IPC).

They were joined by IOC Vice President Professor Ugur Erdener, several Paralympic Order recipients and hundreds of key stakeholders from across the Paralympic and Olympic Movements.  All were treated to a highly entertaining evening charting the IPC’s rich 30-year history and looking ahead to the future.

The IPC was formed in Dusseldorf, Germany on 22 September 1989 and during his welcome address IPC President Andrew Parsons made reference to this landmark date in the Paralympic Movement’s history.

“It is an absolute honour and privilege to welcome you all to this very special evening as we celebrate 30 fantastic years of the IPC,” said Parsons.

"How fitting it is that we celebrate three decades of achievements here in Bonn, a city that has been our home for the last 20 years.

"So much progress has been made in the last 30 years and this is testament to the tremendous efforts of many, many people. This includes the IPC membership, IPC staff, volunteers, classifiers, the IOC, commercial and media partners, my predecessors - Dr. Bob Steadward and Sir Philip Craven - and, of course, the athletes.

"We have achieved a lot in three decades, probably more than anyone expected with the resources available to us. But, what is most exciting is that I think we are only scratching the surface."

Hosted by Beijing 2008 Paralympian and BBC journalist Kate Grey, the dinner featured interviews with key protagonists from within the Paralympic Movement as well congratulatory video messages of support from world leaders, celebrities, athletes and key stakeholders.

In her address, Chancellor Merkel said: “The Paralympic Movement’s success rests on many shoulders – first and foremost on those of the athletes themselves.  They have not only shown athletic prowess, but are also examples of, and ambassador for good co-existence.

“They are proof of the extent to which diversity and inclusion enrich our societies.  Thank you for 30 years of enthusiastic and inspiring work for Paralympic sports.”

“In three decades, you have transformed the world of Para sports and helped thousands of athletes around the world compete at the highest level,” said Trudeau in his message.

Prince Albert said: “Your constant tireless efforts and work have had a huge impact in uniting people and promoting diversity.

“Congratulations IPC on 30 years of fantastic work and, for really in many ways, changing the world,” commented Ardern.

UNICEF’s Fore said: “For 30 years the Paralympics has celebrated what extraordinary athletes can do.  By breaking down these barriers, the Games are contributing to a better, fairer and more understanding world.”

During the evening Parsons was joined on stage by Steadward to share memories of the IPC’s early days and look ahead to the future.

"When the IPC was formed in 1989, I was 12 years old and obsessed, like all Brazilians, with football. I knew nothing about Paralympic sport, had never heard about the IPC and most certainly did not know what impact the Paralympic Movement would have on my life," said Parsons.

"Since my first interaction with the Movement, I can honestly say my life has been transformed. Athletes have captivated me with their outstanding abilities and my involvement with the Movement and the IPC has gone from a passion to my mission in life."

Steadward recalled how "at the beginning we knew that we had to develop a strong relationship and understanding with the IOC. We felt that we had to work closer to the Olympic Movement.

"I am very honoured and proud to be here celebrating our 30th anniversary in Bonn, the home city of the IPC."

Looking to the future, three athletes – IPC Athletes’ Council Chairperson Chelsey Gotell and fellow member Kurt Fearnley, together with Deepa Malik – gave their views on where they would like to see the IPC head over the next 30 years.

The evening concluded with IPC President Andrew Parsons presenting the Paralympic Order - the highest accolade anyone can receive within the Paralympic Movement – to six recipients.

In a highly emotional moment, Parsons presented the first Paralympic Order posthumously to Jose Luis Campo, the former President of the Americas Paralympic Committee who passed away in October 2017.

"He was and will always be my mentor. He was an inspiration for me," said Parsons.

"I remember back in 2003 when Santo Domingo could not organise the Parapan American Games, that Jose Luis Campo said: 'we will do it.' And he delivered a Parapan a year after delivering a Para swimming World Championships, both in Mar del Plata.

"I remember we had a three-sport programme but with passion he kept adding sports and, by the end of the Parapan we had nine sports.

"He also created the Youth Parapan American Games. He made a huge contribution to the athletes in the Americas. His passion was to be with the athletes. Being with him was like going to university.

"When I was elected IPC President in Abu Dhabi, he silently waited in the corner. He must have stayed there for over an hour to give me the last hug. And it was the best hug of that General Assembly.

"It was difficult to accept and to understand that he had passed away. He had a heart attack in a fundraising event to fight cancer. That was Jose Luis Campo, the most generous man I ever met."

IPC members will remain in Bonn until Sunday (27 October), attending the second day of the IPC Conference on Friday (25 October) and the 19th IPC General Assembly over the weekend.