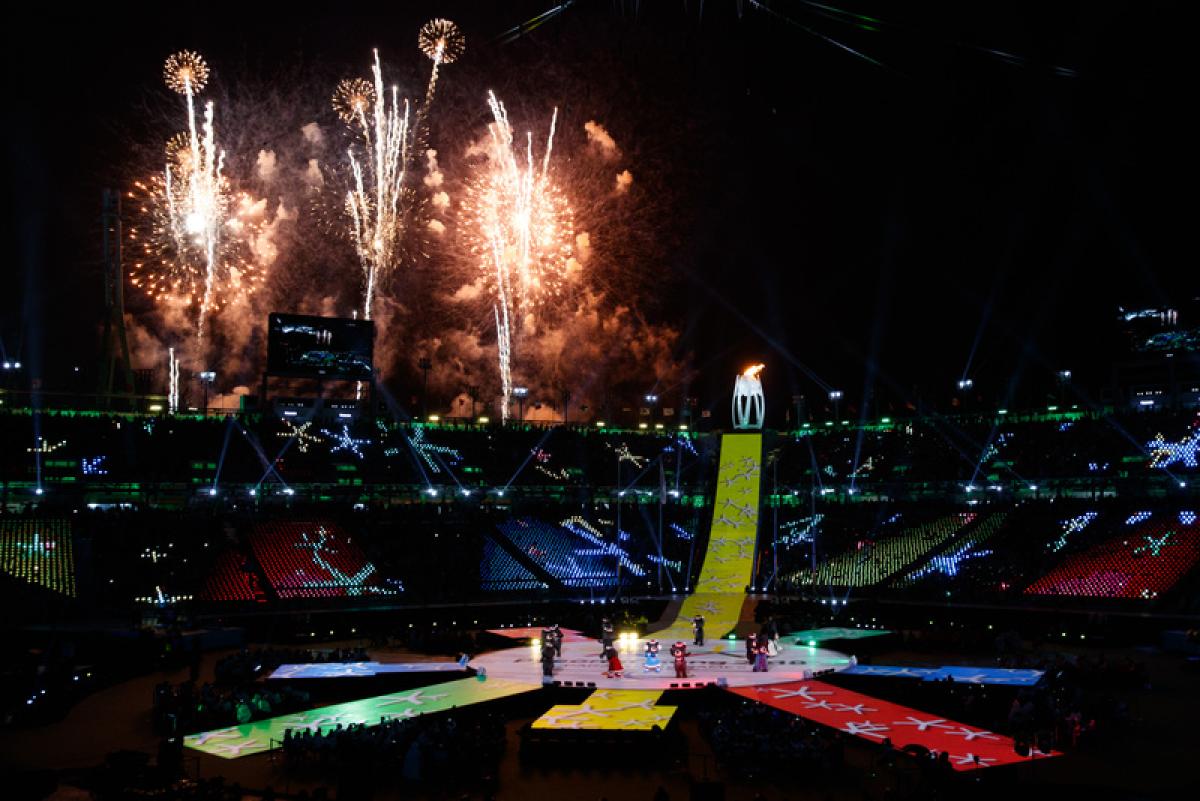 After 10 action-packed days of sports, the Paralympic flame was extinguished.

The PyeongChang 2018 Paralympic Winter Games came to an end in a blaze of fireworks on Sunday (18 March) with a festive Closing Ceremony held at the PyeongChang Olympic Stadium.

The event broke innumerable records, with more athletes from more countries competing, more media and broadcast rights holders attending, and more tickets sold than at any previous edition of a Winter Paralympics.

Moreover, 26 out of the 49 delegations won at least one medal, beating the mark set at Lillehammer 1994, with a record number of 20 taking gold.

The evening began with the playing of the South Korean national anthem and the hoisting of the country´s flag.

It was followed by Korean Folk song 'Arirang' to reminiscence the moments of joy and sorrow during the Winter Paralympics, and recognised the effort and contribution made by the Para athletes, Gangwon Province residents, volunteers and staff.

Every delegation was again received with a wave of applause.

In his speech, the President of the PyeongChang 2018 Organising Committee Lee Hee-beom mentioned Nordic skiers Sin Euu Hyun, who won South Korea's first ever gold in the Winter Paralympics, and USA's Daniel Cnossen to represent all Paralympians.

"Touching stories of human victory drama showcased by Para athletes through these Games will be remembered forever in our hearts," said President Lee.

"PyeongChang 2018 Paralympic Winter Games connected the world as one, and South and North Korean athletes also raised together the Paralympic Torch.

"Paralympic Flame, as it may extinguish, will bring together the world forever in a spirit of peace far beyond the Korean Peninsula."

"One man who had a dream was the late Professor Stephen Hawking, a genius of a man, a pioneer and inspiration to us all. At the London 2012 Paralympic Opening Ceremony, Hawking noted that we are all different and that there is no such thing as a standard or run of the mill human being.

"He urged us all to “Looks at the stars, and not at our feet.”

"And, over the last 10 days the stars have shone brightly here in PyeongChang. While Hawking tested the limits of his imagination, Paralympians, you have once again pushed the boundaries of human endeavour. Your logic defying performances have focused the world not on what holds you back, but on what motivates and pushes you forward."

The Closing Ceremony also included the official presentation of the Whang Youn Dai Achievement Award for New Zealand's alpine skier Adam Hall and Finland's Nordic skier Sini Pyy, the two Paralympians who were considered to best exemplify the spirit and values of the Games.

Marie Bochet, Rudolf Klemetti and Birgit Skarstein, the three IPC Athletes' Council winter representatives elected during the Winter Paralympics, were introduced, and a flower presentation was made to all the volunteers who participated in the event.

The Bae Hui Gwan Band, which is made up of musicians with impairments, then took to the stage preparing for the final act when it was joined by South Korean pop star Ailee. The PyeongChang Olympic Stadium became a great party to the delight of the home crowd.