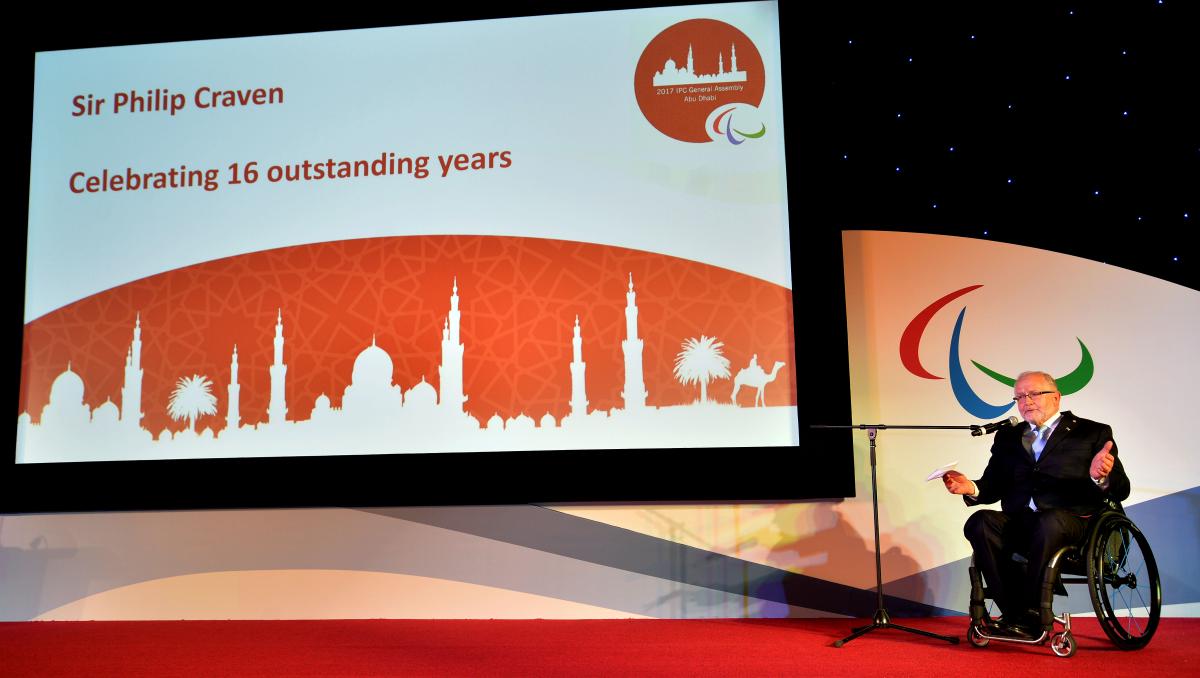 “Throughout his Presidency Sir Philip has had an amazing ability to open doors for the IPC, creating opportunities for the organisation to grow further. No matter whom he meets – whether a world leader or person on the street – his down-to-earth approach has ensured they quickly understand the benefits of supporting the Paralympic Movement."

Almost 16 years after becoming International Paralympic Committee (IPC) President, Sir Philip Craven will step down from his role on Friday (8 September) after transforming the Paralympic Movement beyond all recognition.

First elected in Athens, Greece, in December 2001, the 67-year-old British five-time Paralympian has, in his own words, transformed the Paralympic Movement’s global governing body from a “disability sports organisation to one of the most highly respected sports organisations in the world.”

Under Sir Philip’s watch, the IPC has developed a reputation for strong governance and integrity, growing Para sport globally and staging sport events that transform and enrich the lives of millions of people around the world.

Thanks to the leadership of the former wheelchair basketball player, the Paralympic Games have been repositioned as a high performance sport event attracting millions of spectators and billions of TV viewers.

Hundreds more athletes and far more countries now compete in the Games while over the years athletic performance has skyrocketed across all sports. This was highlighted at the Rio 2016 Paralympic Games when Iran’s Siamand Rahman became the first powerlifter to lift over 300kg, eventually lifting 310kg. Cuban T12 sprinter Omard Durand clocked 11.40 to win 100m gold, more than a second quicker than the Sydney 2000 champion in the same event.

In terms of ticket sales, the Paralympic Games are now the world’s third biggest sport event – only the Olympics and FIFA World Cup sell more. TV audiences have grown from a cumulative 300 million for the Sydney 2000 Paralympics before Sir Philip took over to more than 4.1 billion in 154 countries for his final Games in Rio in 2016. A further one billion people also now engage with the Paralympic Movement annually via digital media.

As a result of the growth of the Paralympics during Sir Philip’s 16 years, the impact the Games have on society has significantly increased. Today, the Paralympic Games is considered the world’s number one sport event for driving social inclusion with athletic performances having a seismic impact on changing attitudes towards people with an impairment.

Miguel Sagarra, the IPC’s Secretary General when Sir Philip was elected in 2001 and then Vice President from 2005-2009, believes Sir Philip’s no-nonsense straight talking approach, has helped him during his Presidency.

“From the moment he took over, Sir Philip showed immense passion and energy for the role and was extremely clear in what he wanted to achieve as President,” explained Sagarra. “He developed a clear vision for the IPC which was underpinned by a set of athlete-focused values which have remained the bedrock of the IPC ever since. He developed some core principles and we have stuck to them throughout his 16 years, ensuring strong governance.

“It sounds simple now but it has taken a long time and an immense amount of effort by many people involved in the Movement to achieve. Sir Philip has driven that change and he fully understands that we are still only scratching the surface and even more can be achieved.

“The Paralympic Games are now not only a great sport event, but a fantastic vehicle for changing the attitudes of millions of people.”

Away from the Paralympic Games, Sir Philip - only the IPC’s second President - developed stronger relations with the International Olympic Committee (IOC), providing greater financial stability and expertise for the IPC to call upon.

Taking the IPC to the next level

Xavier Gonzalez, the IPC’s Chief Executive Officer, said: “When Sir Philip took over the IPC had very little of its own money and had only recently started a relationship with the IOC.

“Sir Philip took the IOC relationship to the next level. The “Two Games, One City” model which ensures the Paralympics is always held in the same city as the Olympics has ensured the Paralympic Movement’s long-term growth. To always use the same city, same venues and same infrastructure as the Olympics is an outstanding opportunity. The IOC-IPC agreement has now developed into more of a partnership for both organisations which is set to continue until at least 2032.”

Gonzalez also praised Sir Philip’s capacity to engage anyone he meets, no matter what the situation, and also spoke of his friendship with the IPC President.

“Throughout his Presidency Sir Philip has had an amazing ability to open doors for the IPC, creating opportunities for the organisation to grow further,” he said. “No matter whom he meets – whether a world leader or person on the street – his down-to-earth approach has ensured they quickly understand the benefits of supporting the Paralympic Movement. It’s a wonderful asset he has.

“Sir Philip is a hugely passionate man and has this unique talent of meeting new people and, within minutes, making them feel as if they have been friends for life. He is a man of huge integrity, a characteristic he has implemented across the IPC and Paralympic Movement.

“He is a straight talking northern Englishman and I am a Catalan. The two ingredients do not always mix in life however I have enjoyed a very strong bond and outstanding working relationship with him over the years and I know I personally, together with the whole IPC staff, will miss his energy, passion and inspirational personality,” Gonzalez added.

With a strong platform for growth as a result of the IPC’s relationships with the IOC, the size of the Paralympic Movement has rapidly evolved. The IPC membership - made up of National Paralympic Committees, international federations, International Organisations of Sport for the Disabled and Regional Organisations – has grown from 148 members in 2001 to 202 in 2017. At the same time the amount of investment and support offered to the membership centrally from the IPC has also increased.

During his four terms the IPC’s workforce in Bonn, Germany, has matured and grown from nine full-time staff in 2001 to 100 people today. The organisation’s revenues have increased from EUR 1 million in 2001 to EUR 20 million and the IPC today boasts a sponsorship portfolio that includes six companies listed in the top 200 of the Fortune 500.

The 10 sports for which the IPC acts as international federation have also enjoyed significant growth and are now much stronger than they were. This was best shown in July when London staged the 2017 World Para Athletics Championships which attracted over 300,000 spectators and were broadcast in 87 countries to millions of people.

By the end of this year more than EUR 3.25 million will have been invested into Para sport projects around the world via the Agitos Foundation, the development arm of the IPC set-up in August 2012. So far for close to 400,000 people in more than 80 countries have benefitted from the Agitos Foundation’s work which is already paying dividends. A record 83 countries won medals at Rio 2016.

Miguel Sagarra added: “Under Sir Philip’s leadership, the IPC developed a strong brand with strong principles which far more people around the world are now aware of. With far greater awareness, more organisations than ever before want to work with the IPC and be part of our journey to make for a more inclusive society through Para sport.

“Sir Philip leaves the IPC in outstanding shape. He leaves behind a strong sport organisation that behaves live a business, not a business that sport as a product. His successor should ensure this does not change.”

Sir Philip’s successor as IPC President will be elected in Abu Dhabi, UAE, on Friday. Four candidates – Canada’s Patrick Jarvis, Brazil’s Andrew Parsons, Denmark’s John Petersson and China’s Haidi Zhang – are in the running to be elected by the IPC membership.