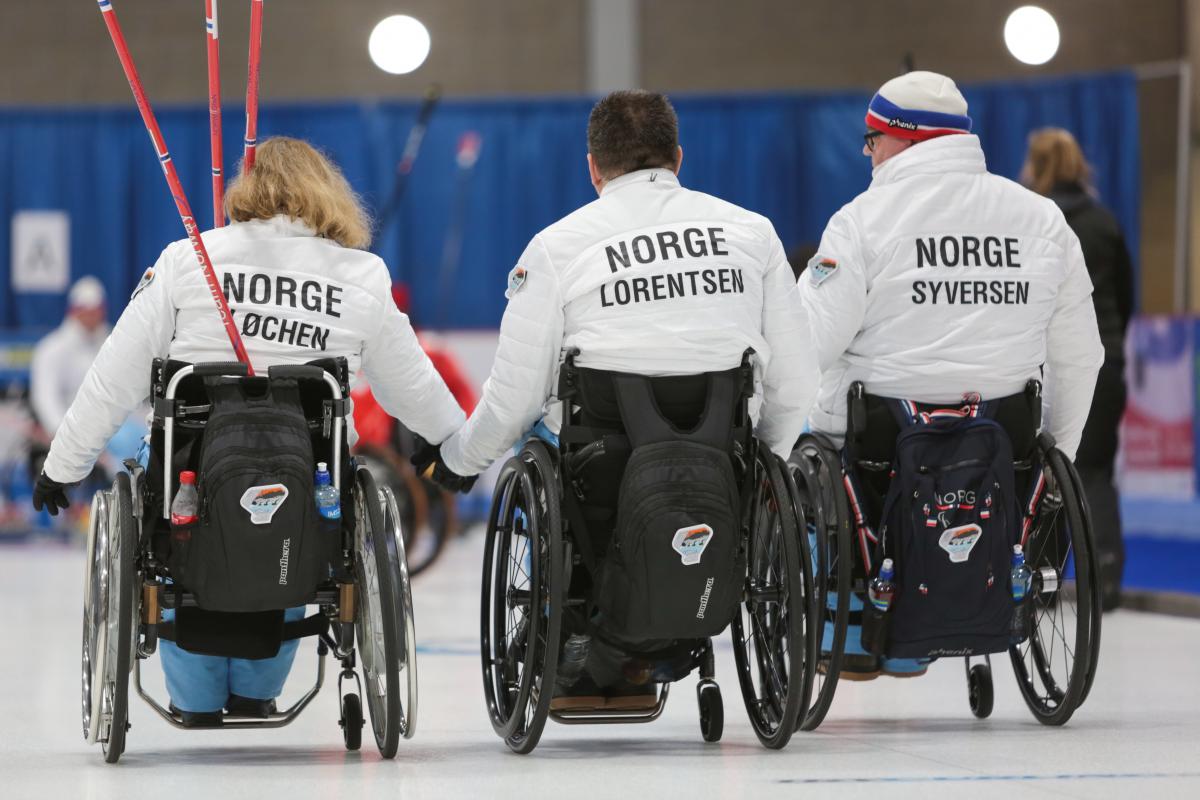 Norway consolidated their position at the top of the World Wheelchair Curling Championship 2019 standings on Thursday, adding another two wins to their tally in Stirling, Great Britain.

By the end of the penultimate day of the round-robin stage, Norway had won seven games and lost two.

The defending world champions delivered an impressive 10-1 win over Switzerland and followed it up with an 8-1 victory against Latvia on day five.

“I’d love for us to be in the top two in the round robin so we can save one match on Saturday night, but I’ll just be glad for us to make the finals,” said Norway skip Rune Lorentsen after the victory over Latvia.

China are now in second place in the rankings, after defeating Russia* 4-3 in a tight extra-end match.

Russia were down 2-3 after six ends in the game against the PyeongChang 2018 Paralympic Winter Games champions and decided to blank the seventh end in order to retain their last-stone advantage in the eighth. The gamble paid off as Russia picked up a point to tie the game.

In the extra end, Russian skip Andrei Meshcheriakov was unable to place his last stone as he wanted, giving China the win.

However China were unable to match Norway’s results and lost a close game to Slovakia later on. With the scores level after six ends, Slovakia stole two points in the last two ends to win 7-5.

The result completed a solid day for Slovakia, who had earlier beaten Scotland 9-5, largely due to a steal of four points in the second end.

But the hosts bounced back in the evening to hand Russia their second defeat of the day with a 5-4 win.

Switzerland and South Korea on the up

“It’s all getting better for us, now that we’ve found our game, and everybody back home is getting excited for us now. I feel more confident and relaxed now,” he said.

Despite this confidence, Estonia lost 5-6 in the evening session to Switzerland, meaning the Swiss overtook them in the rankings. South Korea also moved up the standings after winning two extra-end games against the USA and Germany.

In the morning match, US skip Steve Emt played two good stones in the eighth end, levelling 6-6 to force the extra end. However Emt’s final stone of that extra end was too heavy, meaning South Korea scored one point and won the match without having to play their last stone.

At the break against Germany, the game was level with three points apiece, and the two teams traded single points in the following four ends.

South Korea managed to build a strong position with three stones in the house that were guarded. Germany were unable to break through, and once again South Korea won 8-5 without the final stone being drawn.

The last day of the round-robin will see intense competition, with five teams currently tied in third place. Canada, Latvia, Scotland, South Korea and Switzerland all have five wins and four losses.

Only six teams will progress to the play-offs, while the bottom three will be relegated from this level of competition. Germany currently sit in last place after winning just one match in the championship.