One of the brightest young rising stars in the Paralympic Movement, Mahlangu is one of the nine Paralympians featured in the Netflix documentary 'Rising Phoenix'.

Born with hemimelia, which meant his legs didn’t fully develop below the knees, Mahlangu spent much of his early life in a wheelchair.

Then in 2012 the decision was made to amputate both legs at the knee. In September that year, Mahlangu received his first set of blades through the South African charity Jumping Kids – and he hasn’t looked back.

Four years later, the South African lined up at his first Paralympic Games in Rio de Janeiro. At just 14-years-old – one of the youngest competitors at the Games – he finished second behind defending champion Whitehead in the men’s 200m T42, setting a new African record (23.77) in the process.

Mahlangu had already shown lot of prospect from the time he got hooked to the sport. I 2015 he won the 200m and 400m T42 at the IWAS World Junior Games in Stadskanaal, the Netherlands; a year later at the IWAS Under 23 World Games in Prague, Czech Republic, he won four gold medals and set what was then a new world record in the 400m T42. He returned home with the ‘Best Athlete of the Games’ award. 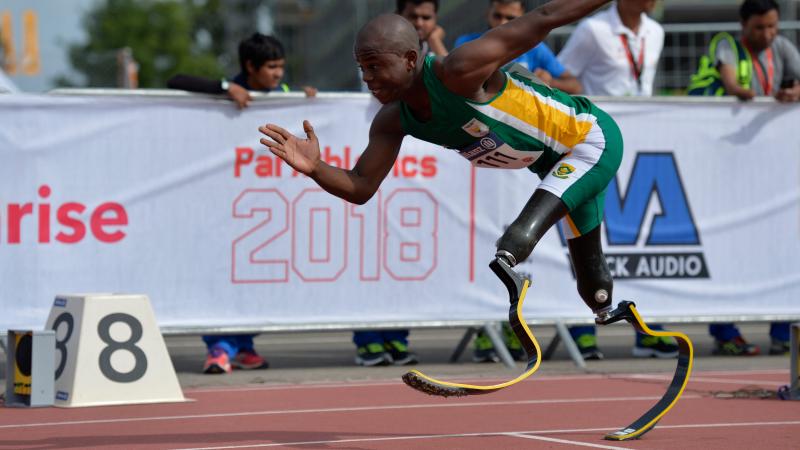 When and where did you begin this sport?
He took up Para athletics in 2015 in Pretoria, South Africa.
Why this sport?
He was inspired to take up the sport after meeting South African Para sprinters Arnu Fourie and Samkelo Radebe, and seeing the medals they won at the 2012 Paralympic Games in London. After taking up the sport, he says South African organisation Jumping Kids helped him progress into elite Para athletics. "Jumping Kids supported me through the process, with my prosthetics [and] helped me get into mainstream schooling and into different sports competitions. Once I started to show talent, Jumping Kids helped me attend international competitions, where I again did well and broke my first world record. That's when I knew I was an athlete."
Club / Team
Is Ability Sports Club: Pretoria, RSA
Name of coach
Cathy Landsberg [personal], from 2015

Nicknames
Blades (paralympic.org, 27 Aug 2020)
Hobbies
Watching football. (Paralympics Instagram profile, 25 Aug 2020)
Most influential person in career
His family. (Athlete, 12 Jul 2017)
Hero / Idol
South African middle-distance runner Caster Semenya. (Athlete, 12 Jul 2017)
Sporting philosophy / motto
"I want to show people that if I can respect the person that I am running next to, then we can all respect each other. You don't have to be the president to make a change in your country. You can just be a normal guy and you can make a change." (paralympic.org, 11 Apr 2017)
Awards and honours
He was named Sportsman of the Year with a Disability at the 2019 South African Sport Awards. (Sunday Times, 29 Mar 2020)

He was presented with the Best Athlete award at the 2016 International Wheelchair and Amputee Sports [IWAS] U23 World Games in Prague, Czech Republic. (jumpingkids.org.za, 29 Jul 2016)
Other sports
He has competed in able-bodied athletics at national level in South Africa. (timeslive.co.za, 10 Apr 2016)
Ambitions
To compete at the 2020 Paralympic Games in Tokyo. (Facebook page, 09 Mar 2021)
Impairment
He was born with fibular hemimelia, which causes the lower leg to under-develop. As a result he had both legs amputated at the knee in 2012. "I attended a clinic at Steve Biko Academic Hospital [in Pretoria, South Africa]. I was 10 and had never walked before, so when they said there was an option for me to walk and run, I told my family that I wanted the amputation so that could happen." (newframe.com, 06 Nov 2019; timeslive.co.za, 10 Apr 2016; jumpingkids.org.za, 01 Aug 2020; paralympic.org, 27 Aug 2020)
Other information
DOCUMENTARY
In 2020 he featured in a documentary film about the Paralympic Games called 'Rising Phoenix'. He appeared in the film alongside a cheetah in South Africa. "Filming was done in very small village I had never been to. People keep asking me whether I have a cheetah as a pet, but no, it is not my pet, it was just brought in for shooting. I think this movie will change many people's mindset. More people will now know what the Paralympics is and start supporting it." (Rising Phoenix, 26 Aug 2020; Paralympics Instagram profile, 25 Aug 2020; paralympic.org, 27 Aug 2020)

OTHER ACTIVITIES
In 2017 he became an ambassador for US television channel Cartoon Network's anti-bullying campaign 'Be a Buddy, Not a Bully'. "I have been bullied due to my disability and know how it feels to have people make fun of you. I wanted to be able to tell my story and hopefully have it help people understand that bullying is wrong and everyone deserves to be treated with respect. (newframe.com, 06 Nov 2019; goodthingsguy.com, 05 Jun 2017)