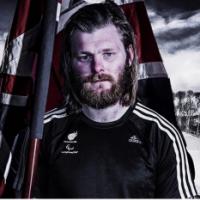 When and where did you begin this sport?
He first tried Para snowboarding in 2013 in Colorado, United States of America, during a trip organised by Blesma, a British charity that assists veterans with a limb deficiency. "I'd never skied in my life until I was looking for something to try as part of my resettlement package from the Army. I tried snowboarding and loved it. It has just progressed from there."
Why this sport?
After enjoying learning the basics of snowboarding, he was able to spend three months in Whistler, BC, Canada, through an army programme for injured personnel, where he trained as a snowboard instructor. By March 2014 he wanted to see how he went competing, and entered the French national Para snowboarding championships, where he was noticed by the British Paralympic team. "The British team contacted me and asked if I wanted to train with them. I hadn't heard about them before, but I said 'OK' and it just started from there. It's the lifestyle [that he loves]. You get to travel the world and be independent, it's only you that's in control."
Name of coach
James Sweet; Karol van Goor, NED

He was presented with the Sporting Excellence Individual Award during the 2017 Soldiering On Awards in London, England. (edp24.co.uk, 03 Apr 2017)
Other sports
He has competed in able-bodied wakeboarding at national level in Great Britain. (bbc.com, 24 Oct 2014)
Ambitions
To compete at the 2022 Paralympic Winter Games in Beijing. (Athlete, 10 Feb 2018; paralympics.org.uk, 16 Mar 2018)
Impairment
In January 2010 he was serving with the British Army in Afghanistan. He stepped on an improvised explosive device [IED] while on patrol, and the explosion resulted in severe injuries to his right leg. In August 2011 he decided to have the leg amputated below the knee. "We had been under fire all day and got the order to assault a compound after a firefight as we helped out a section that had come under heavy contact. The first three dropped their bags so they could be a bit lighter once they got in. One of them said to me just get the bags, and when I took a step there was a big explosion and that was the last thing I remember. It blew me 10 feet in the air and 15 feet back, and apparently I came round asking for a cigarette." (owenpick.com, 01 Jan 2016)
Other information
AMBASSADOR
In 2020 he was named as an ambassador for GB Snowsport's 'Be Brave' campaign, which supports athletes in their physical and mental wellbeing. "From a personal point of view, [the campaign] is massive. I've dealt with mental health issues for the last 10 years since being in the Army and being blown up. I'm very big on speaking openly about mental health, and I try to encourage people to do that anyway. It's something that I learnt very early, that if you keep it all bottled up, it does get worse. It will get to a point where it is a lot harder to fix. But it's not something you can fix, it doesn't go away. It's not like a broken leg. It's with you for life and you've got to constantly manage it and be on top of it. Speaking about it is very important." (bbc.co.uk, 18 May 2020)

PARALYMPIC DISAPPOINTMENT
He said he was "gutted" by his performances at the 2018 Paralympic Winter Games in Pyeongchang in both snowboard cross and banked slalom. "My aim was to come here and [win a] medal. It's upsetting to be so far down that table and not to have performed the way I would have liked. I'll get over it. I'm hard on myself but I set myself a challenge. You're told you can't do certain things because of your injury and I want to prove them wrong. I haven't got a choice whether I continue. I can't leave it. I'm one of those people who sets themselves a goal and I haven't achieved that goal. I'll be back." (eadt.co.uk, 20 Mar 2018; forces.net, 12 Mar 2018)