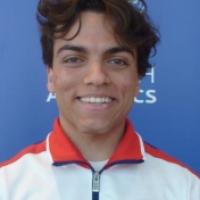 When and where did you begin this sport?
He first tried the sport at a para-sports festival in Sheffield, England.
Name of coach
Paula Dunn [national], GBR

Nicknames
Pani (bbc.co.uk, 09 Jan 2017)
Hobbies
Watching sports videos, playing video games. (sportsaid.org.uk, 01 Dec 2014)
Injuries
An injury prevented him from competing at the 2016 Paralympic Games in Rio de Janeiro. (bbc.co.uk, 09 Jan 2017)
Sporting philosophy / motto
"Always be grateful for what you have and thankful for what people do for you. You never know what tomorrow brings." (Instagram profile, 11 Jan 2016)
Awards and honours
He was named the 2014 Young Sportsman of the Year at the Leicester Mercury Sports Awards in England. (charnwoodsport.org.uk, 16 Jan 2015)

He was named the 2013 Young Powerlifter of the Year by the British Weightlifting Association. (tass.gov.uk, 2015)
Other sports
He won a silver medal at the 2014 Para-Powerlifting World Championships in Dubai, United Arab Emirates. (tass.gov.uk, 01 Aug 2015)
Ambitions
To win gold at the 2020 Paralympic Games in Tokyo. (leicestermercury.co.uk, 10 Jan 2017)
Impairment
He was born with achondroplasia and is a person of short stature. (bbc.co.uk, 09 Jan 2017)
Other information
SCHOLARSHIP
In 2015 he was enrolled onto the Sport England Talented Athlete Scholarship Scheme. The programme aims to help student athletes balance academic life with training and competition. (tass.gov.uk, 04 Sep 2015)