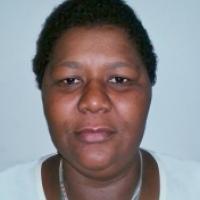 When and where did you begin this sport?
She took up athletics at age 24.
Why this sport?
One day she was approached by a stranger on the street, who asked her if she wanted to be an athlete and a world record holder. Despite her reluctance, she attended a training session and began competing, mainly in the hope of earning enough money to buy a house for her mother. "I did not know that sport for the impaired existed. If I had, I might have searched for it before. But I did not leave the house for years because I didn't want people to ask questions about what had happened."
Name of coach
Walquiria Campelo [personal]; Vanessa Melo [personal]
Training Regime
She trains from Monday to Friday, doing gym sessions in the morning and sessions on the track in the afternoon.

Nicknames
Rosinha, Rosie (Athens, 2004; terra.com 28 Apr 2003)
Hero / Idol
Her mother. (cpb.org.br, 03 Jun 2007)
Sporting philosophy / motto
"Sport has helped me to have more health and stamina to fight in life." (terra.com, 28 Apr 2003)
Ambitions
To create a training centre for para-sports after she retires. (unimedparadesporto.com, 06 Aug 2015)
Impairment
She was hit by a truck at age 18, which resulted in her left leg being amputated above the knee. (esporte.ig.com.br, 07 Sep 2015; rio.rj.gov.br, 31 Jul 2015)
Other information
CANCER SURVIVOR
In April 2014 she was diagnosed with throat cancer. Despite undergoing surgery and chemotherapy, she continued training at a slower rate. She was given a clean bill of health in 2015 and even managed to break a Brazilian national record while undergoing treatment. "My fear was losing the only sponsor I had, so I wanted to go to the Caixa Loterias Circuit in March 2015, despite undergoing chemotherapy. I had a rough time on the plane, but I ended up breaking a record." (bbc.com, 07 Sep 2015, caixa.gov.br, 27 Mar 2015)

RETIREMENT PLAN
She intends to retire after the 2016 Paralympic Games in Rio de Janeiro. (unimedparadesporto.com, 06 Aug 2015)

OTHER ACTIVITIES
In 2014 she founded the Rosinha Santos Athletics Association, aimed at helping young para-athletes. In August 2016 she was the subject of a television documentary in the Discovery Channel. (Instituto Nacional de Tecnologia Facebook page, 31 Aug 2016; ebc.com.br, 16 Oct 2015)