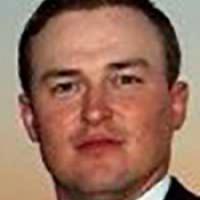 Impairment
While serving in the US Marine Corps in Afghanistan, his right leg was amputated below the knee after stepping on an improvised explosive device [IED] while entering a building. He also suffered severe tissue damage to his left leg. "Instead of getting up and putting on a pair of shoes in the morning, I put on a prosthetic first. But beyond that, I continue to do everything that I did before, and probably more. I'm a downhill skier, and I do that on a prosthetic. I started mountain biking, I had never mountain biked before. So I continue to find ways to push myself." (Baylor University YouTube channel, 04 Jan 2018; kwtx.com, 05 Jun 2017; bushcenter.org, 01 Jan 2016)
Other information
MILITARY SERVICE
He was in the US Marine Corps from 2006 to 2012 and served in Afghanistan and Iraq as a scout sniper section leader. (LinkedIn profile, 01 Dec 2020)

OCCUPATION
He works as a finance program associate for a US technology company and defense contractor in Waco, TX, United States of America, and is a licensed real estate agent. (LinkedIn profile, 01 Dec 2020)

PRESIDENTIAL PORTRAIT
A photograph of him playing in the Warrior Open golf tournament in Dallas, TX, United States of America, in 2011 was seen by former US president George W Bush, who used it as the basis for an oil painting that featured in his book 'Portraits of Courage', and was exhibited in the Bush Center at Southern Methodist University in Dallas. "I would say [the painting shows] resilience. You know keep pushing, that's one of my strongest traits, to keep moving forward. So when I played in the golf tournament it actually was like seven or eight months after my injury. So after the amputation I probably shouldn't have been playing golf at that point in time. But I did compete that year. When we went to the library and I saw the original, that's when I think it really hit me. To see what he [Bush] was able to capture and I think that's what he did so well with all of these. That he captured so much uniqueness for each individual." (kwtx.com, 05 Jun 2017)