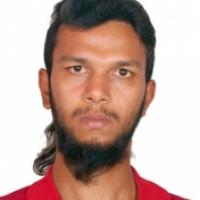 When and where did you begin this sport?
He began Para swimming competitively in 2014.

Hobbies
Dancing. (indiatimes.com, 12 Nov 2018)
Sporting philosophy / motto
"Every day is a new day. I live in the present and enjoy it. There is no need for sympathy from others. We are normal, we are alive and we are capable of achieving many things." (sportsavour.com, 31 Oct 2017)
Awards and honours
In 2018 he received the National Role Model award by the Ministry of Justice and Social Empowerment in India. (indiatimes.com, 12 Nov 2018)

In 2017 he received the Kempegowda Award by the Government of Karnataka in India. (sportsavour.com, 31 Oct 2017)

In 2016 he was presented with the Special Golden Achiever Award by the Academy of Universal Global Peace in the United States of America. (sportsavour.com, 31 Oct 2017)

In 2015 he won the Karnataka State Government Award in India. (sportsavour.com, 31 Oct 2017)
Ambitions
To compete at the 2020 Paralympic Games in Tokyo. (thebetterindia.com, 23 Jul 2016)
Impairment
At age 10 he fell from a terrace at his house onto live electric wires. Both of his hands were amputated following the accident. He also sustained third degree burns and was in a coma for two months. His father died in the same incident as he tried to save Vishwas. (indiatimes.com, 12 Nov 2018; ksvishwas.org, 2019)
Other information
OTHER ACTIVITIES
He has appeared on Indian television entertainment programmes, 'Dance Dance', 'Maja Talkies' and 'Kick'. He also has a red belt in Kung Fu. (indiatimes.com, 12 Nov 2018)