Zahra Nemati is arguably the most popular and successful female Paralympian to come from Iran.

She secured Iran a qualification slot for the Rio 2016 Paralympics as well as Olympics following her performance at the 2015 Asian Archery Championships in Bangkok, Thailand.

The last archer to compete in both Games in the same year was Italy’s Paola Fantato at Atlanta 1996. But not only did she compete at the Olympics, she also carried the Iranian flag during the Opening Ceremony, further raising awareness of the Paralympic Movement.

“Representing as a Paralympian sent an essential message to the world,” Nemati said. “That’s an important message that a Paralympian can qualify for Olympics to compete with elite [able-bodied] athletes and also act as a flag bearer for the country. I was so glad to forward this message with my presence in Rio Olympic Games.”

At the Rio 2016 Olympics, Nemati put together a 28 in the second set to get on the scoreboard – but could not produce in the closing series, and ultimately fell out of the competition, 6-2.

She returned to the Sambodromo for the Paralympics and successfully defended her title from London 2012, where she became the first Iranian woman to win gold at either a Paralympic or Olympic Games.

“I ask again all people with disabilities; never surrender in your disability. Be informed that sport is one of the best ways to overcome disability.”

Born in April 1985, Zahra held a black belt in taekwondo before an accident in 2004 left her with a spinal-cord injury.

Two years after the accident, the university student took up archery and quickly proved to everyone that her impairment was no limitation.

Just six months after taking up the sport, she took part in her first National Championships, competing alongside able-bodied archers and finished in third place. As a result, she was invited to join the national archery team and has won a medal in every Championships she has competed in since.

During a two-year period competing with able-bodied archers, she won individual bronze and team silver and bronze medals in Asian competitions. In her first appearance in Para archery at the 2010 Czech Republic Championships, she broke the world record while winning a number of medals in individual and team events.

At the 2011 Archery World Championships in Torino, Italy, she broke the world record in four distances.

Her success resulted in significant media coverage back home and inspired other women to take up Para sport, particularly archery.

“Coming home, I faced joyful, cheerful people,” Nemati said. “Tears came down my eyes when I entered Kerman city with people welcoming my coming to home.”

In 2013, Nemati won an individual award at the SportAccord Spirit of Sport Awards in St. Petersburg, Russia – an accolade that commends the commitment and humanitarian spirit of athletes who have made an exceptional and lasting contribution to using sport as a tool for positive social change.

The same year, she added gold and a bronze medal to her collection at the World Championships in Bangkok, Thailand. 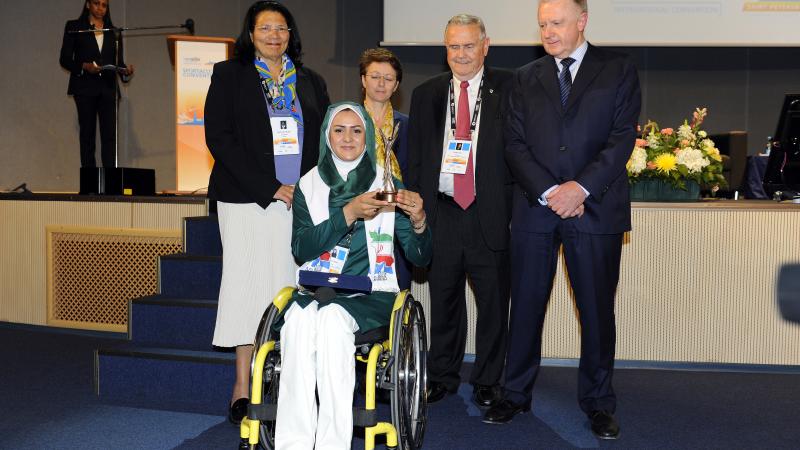