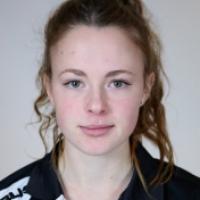 When and where did you begin this sport?
She took up athletics at age 16 in Dunedin, New Zealand.
Why this sport?
In 2013 she attended a camp for athletes with an impairment in Dunedin, New Zealand. "I was pretty reluctant to go. I thought I was going to be shocking. It was scary going there. I felt kind of out of place, like a complete newbie. They all had some form of training and knew what they were doing, but I wasn't as terrible as I first thought."
Club / Team
Hill City-University: Dunedin, NZL

She was named a Member of the New Zealand Order of Merit [MNZM] in the 2017 New Year's Honours list in recognition of her services to athletics. (odt.co.nz, 31 Dec 2016)
Ambitions
To win a gold medal at the 2020 Paralympic Games in Tokyo. (odt.co.nz, 17 Feb 2021)
Impairment
She was born without her right hand due to congenital limb reduction. (nzherald.co.nz, 07 Sep 2015; stuff.co.nz, 04 Sep 2014)
Other information
PROSTHESIS
In 2018 she began using a new attachment for her right arm, which was provided by High Performance Sport New Zealand. The prosthesis is designed to balance out the weight in her upper body, as the left side of her body is naturally heavier because she was born without her right hand. "Athletics is a sport of symmetry and I'm not symmetrical, so I thought I should try to even that out a bit. It's been difficult getting used to it. It was difficult at the start, but now it feels kind of natural. Your legs follow what your arms do and to not have that weight and momentum from my right arm may impact [my performance]. It's definitely feeling like it will be helpful and it's helping with the mechanics of running now." (odt.co.nz, 12 Dec 2018)

Anna Grimaldi: Turning a negative into a positive