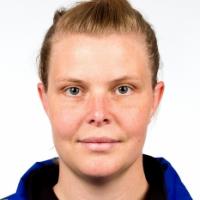 When and where did you begin this sport?
She took up shooting Para sport in 2018.
Why this sport?
She was an able-bodied shooter prior to her accident. She was advised to take up shooting Para sport during her recovery.
Club / Team
I16/LV6 Skytteforening: Sweden
Training Regime
She trains every day. She fires about 70,000 shots and trains for a total of 1000 hours each year.

Injuries
She broke her foot in January 2020. (svt.se, 25 Aug 2020)
Sporting philosophy / motto
"When I lower my ear defenders, I do not want to be disturbed. Then I'm in my world. Shooting is a sport for the head." (forsvarsmakten.se, 09 Mar 2021)
Other sports
She represented Sweden in able-bodied shooting at the world championships in 2010, 2014, and 2018. She was part of the women's 300m rifle prone team that won gold at the 2014 World Championships in Granada, Spain. (SportsDeskOnline, 12 Mar 2021; svt.se, 25 Aug 2020)
Ambitions
To win a medal at the 2020 Paralympic Games in Tokyo. (svt.se, 25 Aug 2020)
Impairment
She broke her ankle while on a training exercise with the Swedish Army in 2014. She underwent five operations but was unable to regain full function of her ankle. "I was on a training exercise with other soldiers. We were out in the woods, and I was climbing up to a radio station when I slipped. I fell back, but my foot was still wedged between two stairs. I didn't understand why my injury was so complicated, but then the specialists told me that only one in four people who have this kind of break actually recover." (paralympic.org, 30 Sep 2019)
Other information
TECHNIQUE
She was an able-bodied shooter prior to her accident, and tries to use a modified version of her former stance when competing in shooting Para sport. "The hardest thing to overcome is that my ankle doesn't feel how it used to feel. Most of all it causes me a lot of pain, because the ankle is completely stiff, and if you can't move your ankle, then the bending part has to come from somewhere else. So, then your knees break down. I try to shoot like I did before the accident as much as possible, so I stand on one foot, and I'm on tiptoes on the other. I could sit on a chair but that's so completely new to me, it's too hard. I try to stick to what I'm used to." (paralympic.org, 30 Sep 2019)

MILITARY SERVICE
She serves as an officer in the Swedish Army, and worked with the air defence section that helped protect United Kingdom airspace during the 2012 Olympic Games in London. (forsvarsmakten.se, 09 Mar 2021; paralympic.org, 14 Oct 2019, 30 Sep 2019)

Second time is a charm for Normann

Normann back on her ‘dream’ march