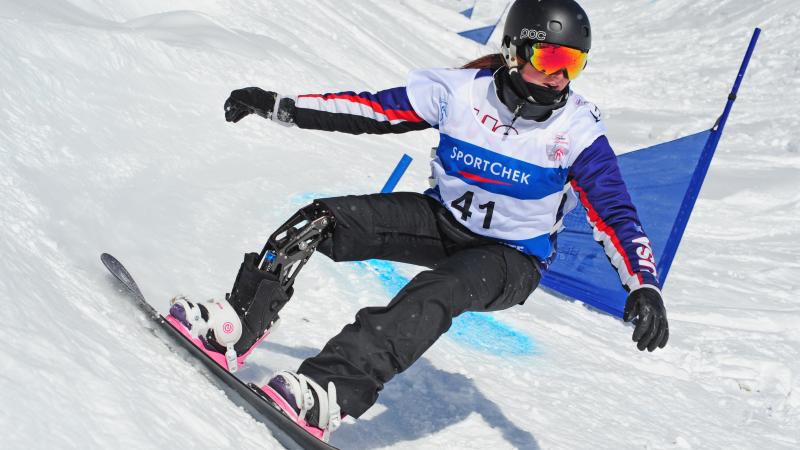 Brenna Huckaby was one of the highest-profile athletes in the sport, and she lived up to the hype in her first Paralympics at PyeongChang 2018.

At 22 years old then, Huckaby claimed both women’s snowboard-cross and banked slalom SB-LL1 titles. It was a successful debut, with the gold completing her collection of world titles and World Cup crystal globes; she was also the overall crystal globe winner of the 2017-18 World Cup season.

Huckaby stormed into the Para snowboard scene at 19 years old, when she claimed a pair of World Championship medals, including gold in snowboard-cross. She missed the next season due to pregnancy but came back even stronger. Rejoining the national team’s training in August 2016, Huckaby reached the top of the podium in all but two of her World Para Snowboard events in the season.

Just a few points separated her from French rival and overall World Cup winner Cecile Hernandez. But Huckaby, at 21, positioned herself as a gold-medal favourite for PyeongChang 2018 after taking double-gold at the 2017 World Championships in Big White, Canada.

She overtook Hernandez in the snowboard-cross big final to win. The following day, she overcame a technical error in her first run of the banked slalom to clock the fastest time in her second to win another world title.

Huckaby’s first love was gymnastics. At 14 years old, she was diagnosed with Osteosarcoma, a rare bone cancer which resulted in the amputation of her right leg above the knee. Following a difficult year in which the teenager had to give-up gymnastics, Huckaby was invited on a rehabilitation ski trip. She wanted to snowboard because it reminded her of the beam, her most successful event, and the transition was smooth.

When and where did you begin this sport?
She began Para snowboarding in 2013. Prior to the amputation of her leg she was a gymnast.
Why this sport?
She was introduced to the sport on a rehabilitation ski trip to Park City, UT, United States of America, which was organised by the MD Anderson Cancer Center in Houston, Texas. "I had never seen a big mountain with snow on it, or a ski resort before my amputation. I pretty much jumped into snowboarding like I did with gymnastics. I fell in love with it. I guess the spark I have for it made me such a better rider."
Name of coach
Lane Clegg [personal]

She has suffered a broken hip during her career. (Athlete, 10 Feb 2018)
Sporting philosophy / motto
"Champions keep playing until they get it right." [Billie Jean King] (Athlete, 10 Feb 2018)
Awards and honours
In 2018 she was recipient of the Best Female Athlete with Disability Award at the Excellence in Sports Performance Yearly [ESPY] awards ceremony in Los Angeles, CA, United States of America. (teamusa.org, 27 Dec 2018)

She was named the International Paralympic Committee [IPC] Americas Athlete of the Month for February 2018. (paralympic.org, 05 Mar 2018)

She received the 2017 Adaptive Athlete of the Year award from the US Ski and Snowboard Association [USSA]. (Athlete, 10 Feb 2018)
Impairment
In November 2010 her right leg was amputated above the knee due to osteosarcoma [bone cancer]. She completed nine months of chemotherapy to ensure the tumour was gone once her leg had been amputated. (steamboattoday.com, 04 Sep 2016, 23 Feb 2014)
Other information
BODY POSITIVE
She posed in Sports Illustrated magazine's swimsuit edition in 2018. "It was all about body positivity and showing the world how confident and how empowered I am, and that I can be strong and I can be beautiful, and I can be powerful in snowboarding, or as a mother, or in a swimsuit on the beach for everybody to see. Regardless of what you're going through, who you are, or what your body's like, you're a force, you're awesome, you're a boss. I wanted to show anybody out there who's dealing with something that they can overcome it and I wanted to be that role model for women with disabilities. Being featured in the 'Sports Illustrated' magazine was far more powerful than I envisioned. I shot with them so I could be the example I didn't have while going through amputation. Once Sports Illustrated came out I noticed a ton of other brands using women with disabilities in their advertising and I couldn't be more proud. We are changing the world." (pyeongchang2018.com, 08 Mar 2018; paralympic.org, 01 Feb 2019)