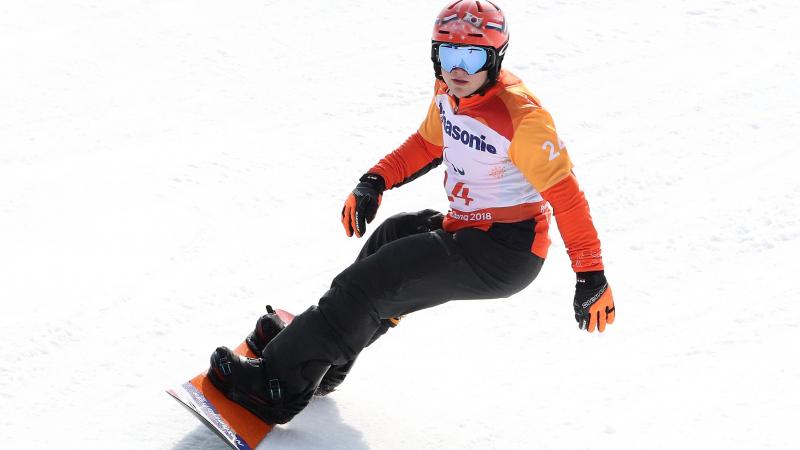 It helped that the youngster began the sport early, being a protégé of legendary Paralympic and world champion Bibian Mentel-Spee.

He was only 16 years old when he competed at Sochi 2014, where snowboard debuted in the Paralympics. His 13th place finish in snowboard-cross was just a hint of his potential in future Games.

Vos stunned the sport at the 2015 World Championships, storming to double gold in banked slalom and snowboard-cross in the men’s SB-LL1 at just the age of 17.

That season, he also finished atop the World Cup rankings for his classification after four podium finishes. And he repeated the two World Cup wins the following season.

Vos’ talent continued to shine even brighter after retaining his titles at the 2017 Worlds in Big White, Canada; he also won the men's SB-LL1 snowboard-cross crystal globe in 2016-17. But, in the banked slalom, he was overcome by the USA's Mark Mann, the very man who spoiled Vos’ golden hopes at PyeongChang 2018. The Dutchman felt even more disappointment when he fell short of the PyeongChang banked slalom podium.

But with youth on his side, Vos expressed his determination to make up for his PyeongChang results, especially with Beijing 2022 to look forward to.

When and where did you begin this sport?
He began snowboarding at age seven. He received a prosthesis at age 13, which allowed him to bend his leg fully while snowboarding.
Why this sport?
He was inspired by watching Dutch snowboarder Nicolien Sauerbreij win gold at the 2010 Olympic Winter Games in Vancouver. His parents contacted the local association, and they later got in touch with Dutch Para snowboarder Bibian Mentel, who introduced him to the sport and mentored him ahead of the 2014 Paralympic Winter Games in Sochi.
Name of coach
Frank Germann [national], NED; Bell Berghuis [national], SUI
Training Regime
He includes mountain biking, skateboarding and surfing in his training schedule. "I call it playing outside and for me that works way better because I don't really like the gym."

Nicknames
Adaptive Chris (adaptivechris.com, 22 May 2013)
Hobbies
Wakeboarding, surfing, karting, scuba diving, windsurfing, watching Formula One, cooking, playing video games. (Athlete, 30 Jun 2016; paralympic.org, 15 Dec 2016)
Most influential person in career
His parents and his brother Lorenzo, as well as Bibian Mentel and her husband Edwin Spee. (Athlete, 30 Jun 2016)
Hero / Idol
Para snowboarders Bibian Mentel, Amy Purdy and Evan Strong, Dutch Para alpine skier KJ van der Klooster, Dutch Para sprinter Marlou van Rhijn, Dutch footballer Johan Cruyff. (Athlete, 30 Jun 2016; adaptivechris.com, 22 May 2013)
Sporting philosophy / motto
"I can do everything like everybody." (Athlete, 22 May 2013)
Awards and honours
He was named the International Paralympic Committee [IPC] Athlete of the Month for February 2015. (insidethegames.biz, 09 Mar 2015)
Other sports
His brother Lorenzo has represented the Netherlands in snowboard cross. (adaptivechris.com, 27 Nov 2013)
Impairment
In 2003 he sustained injuries to his right leg and his pelvis in an accident involving a digging machine. (Athlete, 22 May 2013)
Other information
FOUNDATION
In November 2018 he set up the Chris Vos Foundation. The organisation aims to help children and young adults with an impairment get involved in sport and exercise. "After all I have achieved, I find it very nice to inspire and get other people involved. The integration of people with an impairment in this area deserves full attention. A lot of times in the Netherlands you need to buy your own sporting leg or wheelchair and then there's no money for other equipment for your sport, so I really want to help people with [the money] I can get out of the foundation and make them realise their dream." (paralympic.org, 14 Mar 2019; adaptivechris.com, 11 Nov 2018)

AUTHOR
In 2018 he released a book called 'Xtreme'. "It is my story from a five-year-old to now. The first three months after my accident is written by my mother straight out of her diary and how I became me, with the struggles we had to get a normal life. It is about how every step literally was victory for us. The book describes how I got into snowboarding, the people who are important to me, all the ups and downs. The victory and the losses. The books says it all." (paralympic.org, 24 Jul 2018)