IPC Podcast: Ellen Keane on being a role model

'When I was growing up, I became really introverted and it was because I hated the fact that people were staring at me. It’s an awful feeling to know people aren’t looking at you, they’re looking at your arm' 16 Oct 2020
Imagen 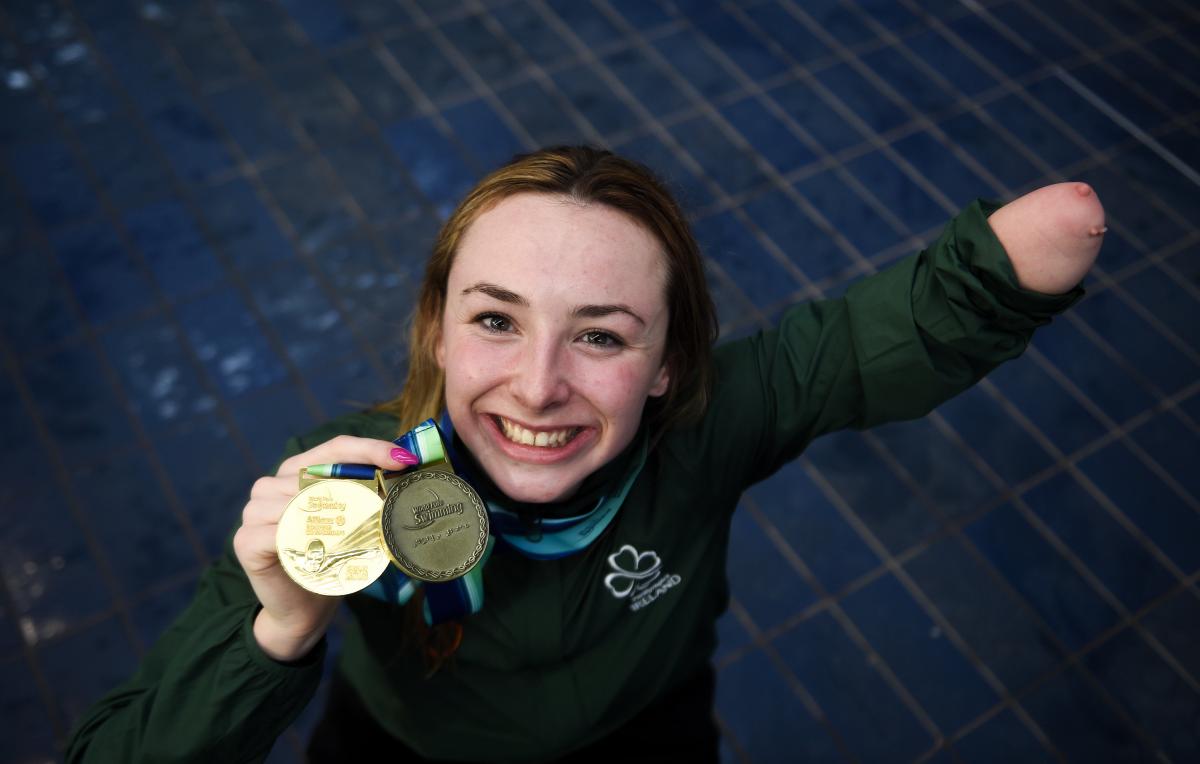 Ellen Keane is anything but ordinary. Born without her lower left arm, the Irish Paralympian grew up with a very conflicting relationship with body image. On one hand, she spent so much energy trying to hide her disability, but on the other… it saw her soar through the water, taking her to the Paralympics at the young age of 13. Keane speaks about her story and her ‘lucky fin’ in the eighth episode of A Winning Mindset: Lessons from the Paralympics.

Full transcript of the podcast

Imagine being Keane at the age of 13 - soaring to the top of her sport in Ireland and stepping into the Paralympic Village for the first time, about to share a home and a pool with some of the best athletes the world had ever seen.

“I didn’t fully appreciate it at the time, how bizarre it was being that young at a Paralympic Games because no one treated me any differently,” she said.

“The only time I remember being kind of a bit afraid and overwhelmed was at my first or second race. I was in the same heat as Nathalie Du Toit, my idol. She had just competed in the Beijing Olympics as well as the Paralympics and she was twice the size of me, and here’s me, the little tiny yolk.

“That’s the only time I remember feeling my age. Things that just don’t affect you as much when you’re young because you’re just kind of living in the moment and you don’t worry about things and I think that’s something that I wish I still had.”

Meeting her idol and swimming at the Games is something that most 13-year-olds only dream about, and these are just two of the reasons why Keane is grateful for her life, and her ‘lucky fin’ that she was born with.

“I do and I don’t (call my arm my lucky fin). For one, when it comes to swimming specifically being a competitor, I’ve noticed that the athletes who have lost their limbs seem to be better in the water. It’s just the bio-mechanic makeup or something.

“They seem to understand the strokes better than those who were born with their limbs, but when then when it comes to learning how to do things, I don’t need to really adapt much because I’ve always had to find another way of doing things. If I struggle to do something, I don’t really get too flustered about it.”

With a 12 years of her career already behind her, Keane is able to look back on what her lucky fin has given her, but living with a disability hasn’t always been easy for the 25-year-old.

“When I was growing up, I became really introverted and it was because I hated the fact that people were staring at me. It’s an awful feeling to know people aren’t looking at you, they’re looking at your arm,” she said.

“When you’re a kid growing up, it’s hard enough being self-conscious if you have bad skin or your hair but my arm, this is something that I can never change about myself, so the only solution I could find was to hide my arm.”

Keane remembers being in her final year of high school, and a boy she had been friends with for two years asked her about her arm.

Despite having been to two Paralympic Games and finding her happy place in the pool, Keane grappled with her body image up until the age of 19.

“When I started college, I knew nobody knew me and there wasn’t a lie then. The lie didn’t exist yet. It was up to me to make sure that the lie didn’t start because once the lie starts, it’s very hard to get yourself out it, I just kind of went in and was like, I have no arm.”

Keane says stories like that highlight the importance for representation.

“Disability can happen to anyone at any point in their life. It’s the one thing that everyone in the world can be affected by…  the more you see of something, the less of a big deal it is and the less scary it is.

“It’s something we should embrace.”

Nowadays, Keane has decided to 'shove' her arm in people’s faces to make it impossible not to look at.

“When it comes to kids reaching out or just wanting to talk, I always listen. Obviously, sport is hard and you have your good days and your bad days. It always seems to be when I’m having one of my bad days, that I’ll have a message in my inbox from a little kid or a mum or something and it will be just like a nice little reminder of why you’re doing it.”