Could not retrieve the oEmbed resource.
Imagen

McKenna Dahl is one of an exciting new crop of shooters to come out of the USA in recent years.

She became the first US woman to win a medal in the sport at a Paralympic Games in Rio de Janeiro. Her bronze in R5 (mixed 10m air rifle prone SH2) propelled her into the media spotlight and represented her best performance.

Maintaining her form has been challenging. At the 2018 World Championships in Cheongju, South Korea; Dahl did not make it to the finals of her three rifle events, nor at the following World Cup in Chateauroux, France.

But the young rifle athlete should not be counted out for the Tokyo 2020 Paralympics.

In 2014, as a teenager, Dahl made a significant step toward achieving her dream of competing at the Rio 2016 Paralympic Games, securing a quota place for the USA at the World Championships in Suhl, Germany.

Her performance was no doubt helped by a move that same year to the US Olympic and Paralympic training centre in Colorado Springs, where the country’s brightest Para athletes gather to live and train.

Then in 2015 Dahl competed at three World Cups, with her best finish coming from a 13th place in R5 on home soil in Fort Benning.

That focus paid off at Rio 2016 when Dahl won a historic bronze in R5.

At the age of 12, Dahl tried shooting for the first time at a summer camp. Originally a wheelchair basketball player, she preferred shooting because it was an individual sport.

While living in Colorado Springs, Dahl takes online courses in business and technology management and a specialisation in criminal justice at DeVry university with a vision of becoming a lawyer.

When and where did you begin this sport?
She took up shooting at age 12 in Washington State, United States of America.
Why this sport?
She was introduced to the sport at a summer sports camp. She originally played wheelchair basketball, but was drawn to shooting because she preferred the individual nature of the sport.
Training Regime
She trains at the US Olympic & Paralympic Training Center in Colorado Springs, Colorado.
Handedness
Right

Hobbies
Photography, reading, spending time outside. (ssusa.org, 08 May 2019)
Memorable sporting achievement
Winning a bronze medal at the 2016 Paralympic Games in Rio de Janeiro. (ssusa.org, 08 May 2019)
Most influential person in career
Coach Dan Steffan, her parents and her grandfather. (Shooting Para Sport Twitter profile, 17 Sep 2020; usashooting.org, 2014; teamusa.org, 08 Oct 2019)
Sporting philosophy / motto
"Keep chipping away at the goals and dreams you have set for yourself. Maybe your dream is to be an Olympic or Paralympic champion. Maybe your dream is to eat better, exercise more, or start that new hobby you've been thinking about. Or maybe your goal is to learn how to prioritise moments of quiet in an otherwise hectic life. Whatever your dreams are, they are worth it." (Instagram profile, 22 Oct 2020)
Milestones
She became the first athlete to win a gold medal in Para shooting at the Parapan American Games when the sport debuted at the 2019 Games in Lima, Peru. She triumphed in the SH2 open 10m air rifle standing discipline. (SportsDeskOnline, 23 Mar 2021; Shooting Para Sport Twitter profile, 17 Sep 2020; usashooting.org, 01 Sep 2019; lima2019.pe, 24 Aug 2019)

She became the first female shooter representing the United States of America to win a medal at the Paralympic Games by claiming bronze in the SH2 open 10m air rifle prone at the 2016 Games in Rio de Janeiro. (SportsDeskOnline, 03 Jul 2022; teamusa.org, 13 Sep 2016)
Impairment
She was born with amyoplasia in her left hand and both of her feet, causing her muscles not to form properly. (Shooting Para Sport Twitter profile, 17 Sep 2020; dafo.com, 09 Jun 2014)
Other information
OCCUPATION
She works in the guest experience team at the US Olympic and Paralympic Museum in Colorado Springs, Colorado. In the run-up to the opening of the museum in July 2020, she gave guided tours of the museum to reporters prior to the ribbon cutting ceremony. She was also one of a group of Para athletes that was consulted for curation advice while the museum was being designed. (Facebook page, 25 Jan 2021; Facebook profile, 02 Nov 2020; gazette.com, 04 Aug 2020)

FURTHER EDUCATION
In 2020 she completed a master's degree in business administration at DeVry University in the United States of America. (Facebook page, 01 Mar 2021; teamusa.org, 18 Sep 2016) 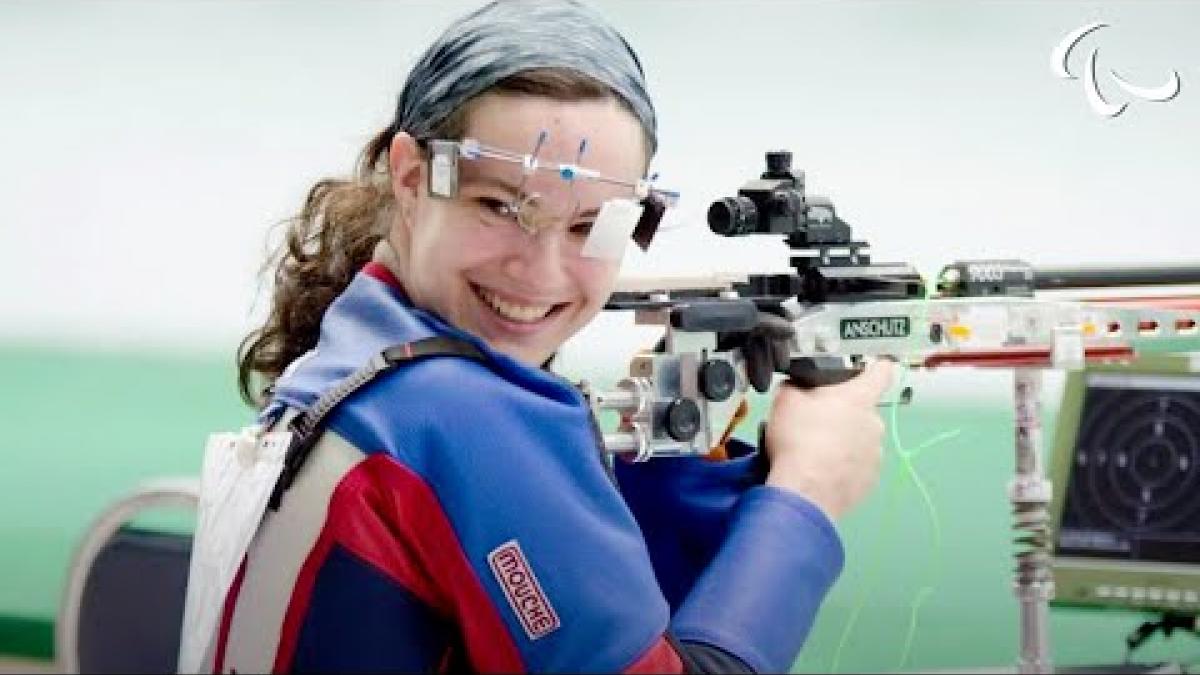