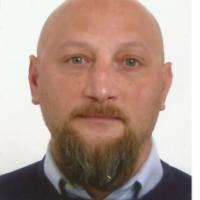 When and where did you begin this sport?
He took up skeet shooting in 2016.
Why this sport?
"I started practising skeet shooting in 2016, I went to practise every now and then to see if I could like it. Then I saw that even with my impairment I could get good scores. In 2017 I started competing among able-bodied shooters. Talking to other shooters I found that I am not that scarce and that there was a movement for Para shooters, so I wanted to try to be with people who probably have the same problems as me."
Club / Team
ASD TAV Conselice: Italy
Name of coach
Benedetto Barberini [national]

Impairment
In 2012 he was involved in a motorcycle accident in Faenza, Italy, which resulted in his impairment. "I was travelling around Faenza and a car pulled into my lane, not giving me time to do anything. In a nutshell, I found myself living with 56 fractures, enduring five surgeries, spending three months in hospital and undergoing two years of physiotherapy. I also found myself living with a limp in my right leg, a right bicep that works at 50%. My left arm no longer has muscles in the forearm, after a major operation to connect as many nerves as possible, the hand and wrist became motionless." (incodaalgruppo.gazzetta.it, 29 Nov 2018)