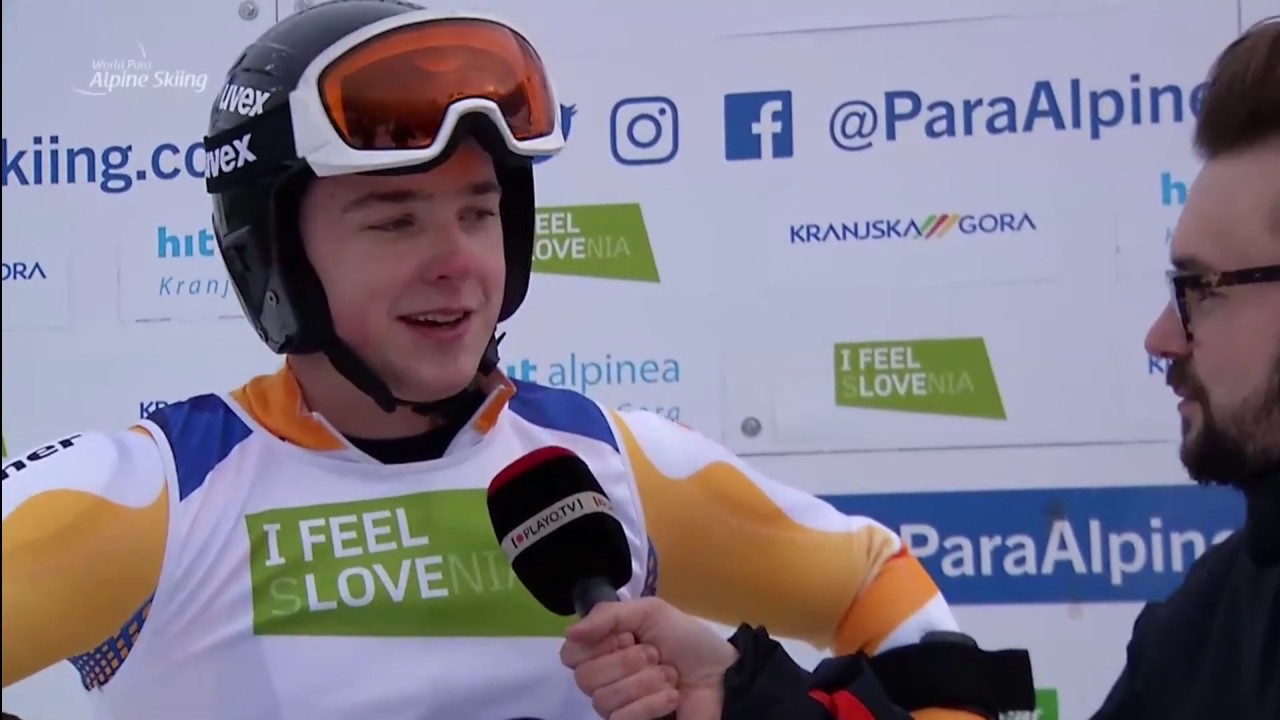 Nerves were high at the starting gate of the men’s giant slalom race in Kranjska Gora, Slovenia, on Monday (21 January) as defending champions braced to fend off their main rivals on the first day of competition at the 2019 World Para Alpine Skiing Championships.

The Netherlands’ Jeroen Kampschreur and France’s Arthur Bauchet were triumphant in defending their titles in the sitting and standing categories, respectively, while a new, surprising winner emerged in the vision impaired class as Slovakia’s Marek Kubacka sped far ahead of the field to his career’s first World Championships medal.

A stellar second run proved golden for Kubacka and his guide of five years, Maria Zatovicova, who got their first world title in Kranjska Gora.

Kubacka finished fifth two years ago and his first run was close to that result, putting him in fourth place. His second run, however, was almost seven seconds ahead of the runners-up, Giacomo Bertagnolli and his guide Fabrizio Casal.

“This is the best time and the best result in Marek’s career and also for me,” Zatovicova said. “Marek is getting better from season to season. I think it’s all about the trust between each other. Marek said that he has full trust in me and I think this is the most important that he trusts me and he does everything that I say.”

Paralympic champion in the event Giacomo Bertagnolli suffered another setback less than a week after his guide lost a ski near the finish line at the season’s first World Cup, which cost him the top prize.

“I’m not surprised that Marek won because Marek is a great skier and I know if he skies well from start to finish, he can beat us, and he skied really well today,” Bertagnolli said.

Old rivals Jeroen Kampschreur and Jesper Pedersen faced off once again on the slopes of an international competition, following Pedersen’s six-month hiatus from training due to a bacterial infection he contracted on his heart in the pre-season.

The giant slalom holds special meaning for both athletes. Kampschreur won the world title in the event two years ago in Tarvisio, Italy, while Pederson won the gold medal at the 2018 Paralympic Games, becoming Norway’s only gold medallist in PyeongChang and an instant celebrity back home.

In Kranjska Gora it was Kampschreur who came out on top, taking a 2.14 lead over the Norwegian and successfully defending his title.

“Jesper has been a big rival for me,” Kampschreur said. “So happy that I could get him now. It’s one of the most important races to win.”

“There’s a lot of pressure to defend the title and I only have things to lose,” he added. “I’m so happy with this run. While I was skiing, I was super enjoying it, like whoah, I’m doing so good right now! This is really intense! Going over the finish line and looking to the left, seeing green, bam, I won. That was amazing. Pressure off.”

Pedersen, meanwhile, was content with third place, given that he only started training again in the middle of December. Two years ago in Tarvisio he crashed in the last part of the race and was unable to complete it.

“As a Paralympic gold medallist, it’s a lot of pressure of course, but with my horrible pre-season, this was overall better than expected so I’m pretty happy,” Pedersen said.

Kampschreur said he owns much of his speed to his teammate and training partner Niels de Langen, who constantly pushes him to ski faster. On the first run, de Langen was only 0.02 seconds behind Kampschreur and ultimately finished second – his best result ever at the Worlds.

Arthur Bauchet was ecstatic to defend his title from two years ago, doing so in style with two top runs and in front of his family. The victory in Kranjska Gora meant even more since he was unable to finish this race on the world’s biggest stage less than a year ago.

Coming in as a medal favourite, Bauchet crashed out of the race at PyeongChang 2018, leaving the door open for his key rival Theo Gmur of Switzerland to take the gold.

“It was really disappointing because I couldn’t show what I wanted to show, but today I showed that I’m here and I can win again,” Bauchet said after reclaiming his status as the fastest man in standing giant slalom.

“I love this race. It was my first gold medal at the World Championships two years ago and then it was just ‘wow’ because I came and I won gold, and here to start with a gold medal, this is so amazing.”

The Paralympic champion Gmur was less than a second behind and had to settle for a second consecutive silver in giant slalom at the World Championships. USA’s Thomas Walsh finished third.

The race also had a different kind of victory for Slovakia’s Martin France who, while failing to get on the podium, was jubilant to shake off an almost 15-year-long curse of getting fourth places in giant slalom at major international competitions, including the 2006, 2014 and 2018 Paralympic Games and the 2004 and 2017 World Championships.

France was fourth after the first run in Kranjska Gora, but dropped lower after the second run and finished sixth overall.

“I thought that I was fourth today, but it’s better in sixth or to go out completely, like in 14th,” he said. “To be fourth again, no! This is better.”

You can watch the World Championships live on World Para Alpine Skiing’s website and Facebook page, where live results will also be available.