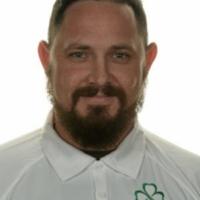 When and where did you begin this sport?
He was introduced to shooting Para sport in 2012 at a Warrior Trials event in the United States of America. He participated at the event in the following two years and decided to pursue shooting Para sport in 2015.
Why this sport?
He got involved in the sport through the 'Help for Heroes' campaign. "I tried it as part of my rehab, found I enjoyed it and wasn't bad at it. Took a couple of years to find where to do it again regularly and find the support."
Name of coach
Raymond Kane [national], IRL; Sean Baldwin, IRL

Nicknames
Phil, Scoob [he used to watch the television series 'Scooby-Doo' as a child and his father began calling him Scoob, which then caught on]. (Facebook profile, 31 Oct 2019; Athlete, 20 Aug 2021)
Hobbies
Travelling, socialising. (Athlete, 20 Aug 2021)
Memorable sporting achievement
Winning a bronze medal at the 2019 World Championships in Sydney, NSW, Australia. (Athlete, 20 Aug 2021)
Most influential person in career
Coach Sean Baldwin. (Athlete, 20 Aug 2021)
Hero / Idol
His father John. (Athlete, 20 Aug 2021)
Sporting philosophy / motto
He has Theodore Roosevelt's 'The Man in the Arena' speech tattooed on his back. "I try to live by it." (Athlete, 20 Aug 2021)
Awards and honours
He received the Soldiering On Royal Navy Royal Marines Award at a presentation in London, England, in recognition of his courage and determination in living with Q Fever. (plymouthherald.co.uk, 06 Apr 2012)
Milestones
He became the first Irish shooting Para sport athlete to win a medal at the world championships when he claimed bronze in the SH2 50m rifle prone at the 2019 edition of the tournament in Sydney, NSW, Australia. (SportsDeskOnline, 05 Aug 2020; targetshooting.ietargetshooting.ie, 22 Oct 2019)
Famous relatives
His wife Julie works as part of the support staff at the Irish shooting Para sport team. (targetshooting.ietargetshooting.ie, 22 Oct 2019)
Ambitions
To compete at the 2020 Paralympic Games in Tokyo. (irishexaminer.com, 14 Sep 2016)
Impairment
In October 2010 he fell ill with Q Fever [Helmand Fever] while serving in Afghanistan. The sickness is contracted by inhaling spores from animal bacteria. On his return home he was admitted to hospital with headaches, myalgia, arthralgia, fatigue, pleuritic chest pain, and severe breathlessness as a result of the illness. (rmctf.org.uk, 01 Aug 2013)
Other information
LIVING WITH HIS CONDITION
He contracted Q Fever in 2010 while serving with the Royal Marines in Afghanistan. The illness caused him to struggle with his identity and mental health and in the years that followed he began growing a beard, which he used as a form of disguise. He started receiving treatment for mental health issues in 2015, and says the 2016 Paralympic Games were a turning point for his mental well-being. "Not being able to play with my children affected me more than I could ever explain. Even things like building a jigsaw puzzle were difficult, as I got tired and frustrated very quickly. I wasn't able to find the balance between what I could manage against the effect it had on me. I'd look at myself in the mirror and did not see a physically strong person. I'd see someone I didn't recognise. When I moved into the electric wheelchair, I really struggled with my mental health, and being in the Marines you're always clean-shaven, and I grew a beard so that people wouldn't recognise me. When people go through those dark times, everyone has some form of disguise, trying to make themselves unnoticeable. That [2016 Paralympic Games] for me was part of the turning point. I could see how proud they [his family] were. That was something then to drive me forward. If you can help one person out, then that's what makes the difference." (paralympic.org, 22 Apr 2020, 17 Sep 2018; irishexaminer.com, 14 Sep 2016; rmctf.org.uk, 01 Aug 2013)

BUSINESS OWNER
He is the founder and project manager of the Victor Mobility business in Exeter, England, which developed a new elevated wheelchair in 2016. "I was given an opportunity not only to change my life path but also the lives of possibly millions of disabled people the world over. With the support I've had, it became vital to find like-minded people who had the foresight of giving disabled people the ability to live in an able-bodied environment, rather than constantly trying to adapt or structurally change everything. To take a disabled person back to a social height, to aid social interaction but also increase independence has been key. I am developing a new wheelchair and hope to have the preproduction prototype at the [2020] Paralympics." (victormobility.com, 01 Jan 2021; amrc.co.uk, 17 Jan 2020; moultontrust.org, 04 Dec 2018; newsletter.co.uk, 16 Nov 2016; pjeaglesham.com, 2016; Athlete, 20 Aug 2021)