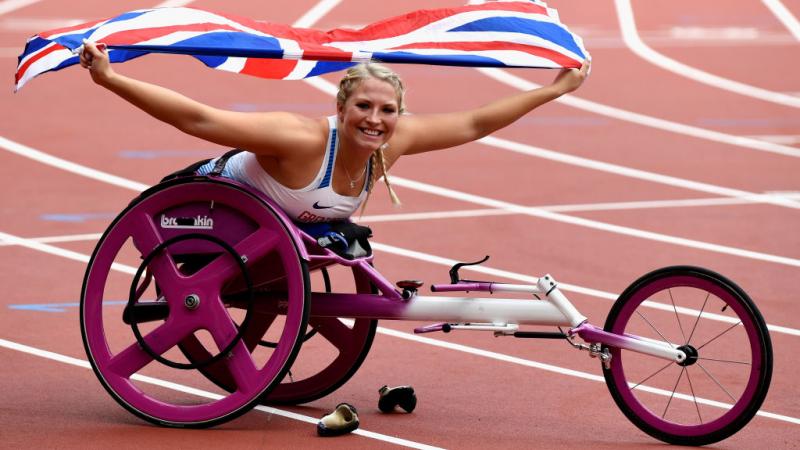 The 2017 season was undoubtedly Kinghorn’s most successful yet.

The Scot, who completes in the T53 class, broke her first ever world record over 200m at the Arizona Grand Prix in May that year, then claimed three European records in Switzerland before heading to the London 2017 World Championships.

Kinghorn also knocked a further 0.06 seconds off her 200m world record as she saw off a highly competitive field including the likes of Australia’s defending champion Angie Ballard.

Kinghorn took up Para athletics in 2011 a year after fracturing her spinal cord in an accident on her family’s farm. She made her senior international debut in 2014 at the European Championships in Swansea, Great Britain, where she claimed three gold medals.

A year later at the Doha 2015 World Championships Kinghorn best placed finish was third in the 200m T53, while at the Rio Paralympic Games she finished out of the medals.

After her success at the London 2017 World Championships, Kinghorn turned her attention to the roads and made her marathon debut in Chicago, USA, in October where she finished fifth. She plans to race the distance at the 2018 Gold Coast Commonwealth Games in April.

Kinghorn was named 2017 Scottish Sportsperson of the Year – the first Para sport athlete to take the top award in its 15-year history. 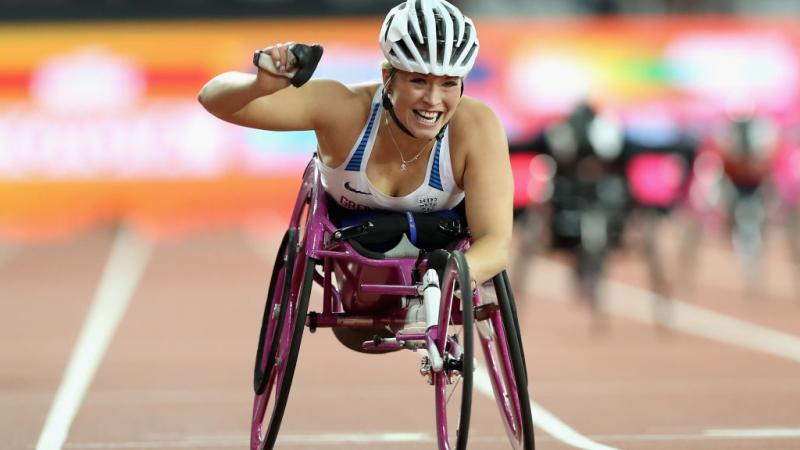 When and where did you begin this sport?
She took up Para athletics in 2011.
Why this sport?
While recovering from her injuries in hospital in Glasgow, Scotland, her physiotherapist took her to try Para athletics at the Inter Spinal Unit Games in Buckinghamshire, England. "The games are about meeting people that have gone through the same thing as you. I tried everything that weekend, and then I tried wheelchair racing. Finding a sport that was adaptable for me to go fast and it looked cool, that's what drove me to start with. Baroness Tanni Grey Thompson's husband was there and I remember him saying that I was really good at it. At 14 years old, for someone to say that to me after something so traumatic was a really good feeling. So I came home from that and said to mum and dad, 'I know what I'm going to do, don't worry about me'."
Club / Team
Red Star Athletics Club: Glasgow, SCO
Training Regime
She trains twice a day, six days a week.

Nicknames
Sammi, Sam (Facebook page, 20 Oct 2020; Twitter profile, 06 Jan 2021)
Memorable sporting achievement
Setting a world record in the T53 200m at the 2017 Desert Challenge Games in Mesa, AZ, United States of America. (impulsemag-online.com, 03 Dec 2018; scottishdisabilitysport.com, 09 Jun 2017)
Most influential person in career
Her family. (impulsemag-online.com, 03 Dec 2018)
Hero / Idol
British wheelchair racer David Weir. (asda.com, 16 Jul 2013)
Injuries
In mid-2019 she needed surgery due to an issue unrelated to sport and was out for three months. "It was frustrating because people thought I was injured and I wasn't, so that's why I put it out there that it was an operation, not an injury." (bbc.co.uk, 04 Sep 2020; heraldscotland.com, 07 Nov 2019)
Sporting philosophy / motto
"'As long as you never give up, you'll never fail' is my mum's favourite saying and it inspires me." (huffingtonpost.co.uk, 22 Mar 2017)
Awards and honours
She was named Female Para Athlete of the Year at the 2017 British Athletics Writers' Association [BAWA] Awards. (britishathletics.org.uk, 20 Nov 2017)

In 2015 and 2017 she won the Findley Calder Trophy from Scottish Disability Sport. (scottishdisabilitysport.com, 01 Jan 2019)

In 2017 she was named Sportsperson of the Year in Glasgow, Scotland. (scottishdisabilitysport.com, 07 Feb 2018)

She was named the 2015 Scotswoman of the Year by the Evening Times newspaper in Glasgow, Scotland. (heraldscotland.com, 20 Mar 2016)

She was named the 2013 Athlete with an Impairment of the Year at the Scottish Sports Personality of the Year Awards. (eveningtimes.co.uk, 03 Mar 2014)
Ambitions
To win gold at the 2020 Paralympic Games in Tokyo, and to continue competing until the 2028 Paralympic Games in Los Angeles. (impulsemag-online.com, 03 Dec 2018)
Impairment
In December 2010 she was helping clear the snow at her family's farm. Her father was driving a forklift to help the process. "I climbed on to the forklift while my dad was driving it. He didn't see me and lowered the beam on top of me, which caused a fracture to my spinal cord. I ran forward and slipped into all the snow that had been compacted, which knocked the spinal cord. I had no idea what was happening, although I knew straight away that I was not going to walk again." (dailyrecord.co.uk, 09 Jul 2014)
Other information
DEALING WITH PRESSURE
She feels there is more expectation for her to perform well since establishing herself as an elite Para athlete, but also believes that she has learned how to deal with pressure and nerves. "I'm at the stage where people are beginning to expect things from me. I go to an event and it's not the same as when I was 17 because people are expecting me to come home with medals now. Now though, I'm used to that. I know I'll probably feel really horrible on the day of the race but I always tell myself I feel like that because I'm passionate about my sport and it's because I want to do well. It's just adrenaline and as soon as the gun goes, I'm in my element and I'm doing what I love. In those hours before the race, you do wonder why you do it but then when the race starts, I know exactly why I do it." (heraldscotland.com, 09 Sep 2018, 01 Apr 2018)

FARM LIFE
She grew up on her family's farm near Gordon, Scotland, and from age five she began delivering lambs. "Things like helping out with the night lambing I can no longer do because I can't miss training the next day. It is heartbreaking because it is something I really enjoy. When I was a kid, I would take time out of school and my friend and I would do night lambing. We would stay awake all night so that my dad could sleep and then do the whole day." In 2020 her father gifted her a pet lamb named Ruby. "My dad would never get me one [when she was younger] because they are like a baby and you have to feed them through the night. For now she [Ruby] will live on the farm and hopefully have lambs in the next few years but one day I would really love to have my own piece of land so I can have her outside my door." (heraldscotland.com, 20 Mar 2016; paralympic.org, 14 May 2020; Instagram profile, 12 Jan 2021) 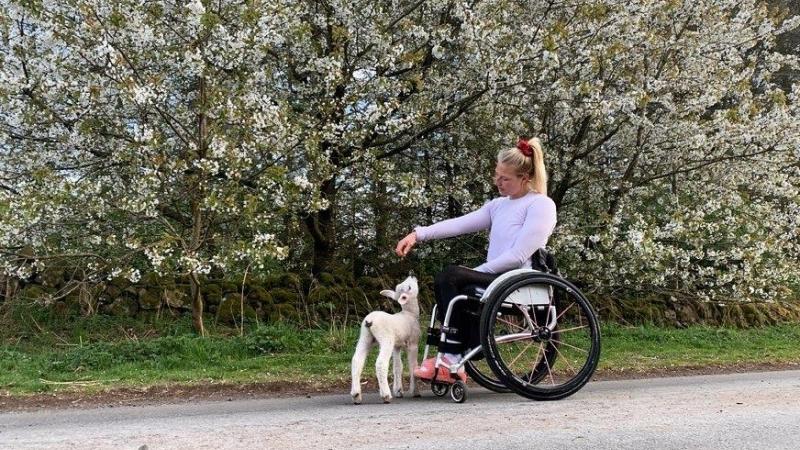