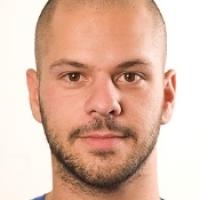 When and where did you begin this sport?
He began playing the sport at age seven in Falun, Sweden.
Why this sport?
He was inspired after watching his first tennis game on TV.
Club / Team
Falu TK: Falun, SWE
Name of coach
Toni Gustavsson, SWE, from 2001
Handedness
Right

He and teammate Peter Wikstrom became the first Swedish wheelchair tennis players to win gold at the Paralympic Games when the pair claimed victory in men's doubles at the 2008 Games in Beijing. (SportsDeskOnline, 24 Mar 2020)
Ambitions
To compete at the 2020 Paralympic Games in Tokyo. (stefan-olsson.se, 17 Mar 2020)
Impairment
As a young child he had a rare congenital disorder known as arthrogryposis, which left him with stiff joints and muscle weaknesses. When he was young he could walk with the aid of crutches, and also play as a goalkeeper in football and ice hockey. However, as he grew older his upper body became too heavy for his legs and he began using a wheelchair. (Athlete, 07 Mar 2014; aftonbladet.se, 28 Jan 2010)