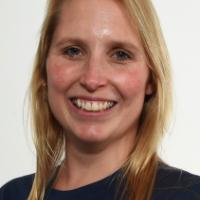 When and where did you begin this sport?
She began swimming at age four in Jeddah, Saudi Arabia, and took up Para swimming in late 2007.
Why this sport?
During her childhood she lived in Saudi Arabia with her family, and as the heat was so intense her mother taught Stephanie and her sibling to swim. When the family returned to the United Kingdom they all joined Corsham ASC in Wiltshire, England. She spent almost 10 years away from competitive swimming after she was diagnosed with multiple sclerosis, but her husband Adrian inspired her to return to the sport.
Club / Team
Team Bath Aquae Sulis: England
Training Regime
In addition to her work in the pool, she goes to the gym three times a week. She also incorporates horse riding and yoga into her training programme.

She did not make the national squad for the 2015 World Championships in Glasgow, Scotland, after a virus affected her performances in the build-up to the event. (bathchronicle.co.uk, 30 Mar 2015)
Superstitions / Rituals / Beliefs
She practises meditation each morning. "It's something I took up for this four-year cycle towards Tokyo [the 2020 Paralympic Games]. I find it very beneficial, because it puts your head in the right place." (britishswimming.org, 11 Nov 2020)
Sporting philosophy / motto
"Swimming has helped me get my life back. In fact, it has given me a life. If I walk too far, I get tired and I fall and I start tripping over, but I don't need to walk when I am swimming. I have no trouble in the water. It is a safe thing for me." (mirror.co.uk, 18 Apr 2012)
Awards and honours
In 2018 she was named South West Para Swimmer of the Year by Swim England South West. (gazetteandherald.co.uk, 27 Mar 2018; somersetasa.org, 01 Jun 2018; Instagram profile, 04 Jul 2018)

In 2013 she received the freedom of Corsham, England. (thisisbath.co.uk, 26 Feb 2013)
Other sports
She competed in able-bodied swimming and trained with the Great Britain squad in the build-up to the 2000 Olympic Games in Sydney. (Athlete, 23 Jul 2010)
Ambitions
To win a medal at the 2020 Paralympic Games in Tokyo. (edinburghnews.scotsman.com, 24 Apr 2019; manchestereveningnews.co.uk, 26 Apr 2019)
Impairment
She was diagnosed with multiple sclerosis at age 17. The condition affects her walking, vision, balance and coordination. (Athlete, 23 Jul 2010; aboutms.co.uk, 29 Jan 2010)
Other information
FUTURE PLANS
She intends to retire from competitive Para swimming after the 2020 Paralympic Games in Tokyo. She works part-time as a bookkeeper and has studied to pursue a career in accounting. "I love numbers. Numbers are good, because with numbers, you always get a correct answer. I hope accounting will become my second career when I retire from swimming." (britishswimming.org, 11 Nov 2020; training-link.co.uk, 16 Nov 2018)

INSPIRATION TO RETURN TO THE SPORT
She stopped swimming after being diagnosed with multiple sclerosis, and also failed her final high school exams, gained weight and had depression. She was initially unwilling to return to the pool as it reminded her of what she had lost, but gradually began swimming as light exercise. She was then asked to help teach someone to swim as part of their triathlon training. Her pupil was Adrian McHugh, who she would go on to marry, and he was the motivation for her to take up Para swimming. "He inspired me and gave me belief. Before then I had tried to get in the pool a few times but then I'd struggle to get out. Just walking to the changing room was really hard. He gave me a goal." (thetelegraphandargus.co.uk, 19 Oct 2014; bathchronicle.co.uk, 25 Aug 2012; mirror.co.uk, 18 Apr 2012; britishswimming.org, 29 Jan 2010; bbc.co.uk, 31 Dec 2009)

AUTHOR
She released an autobiography titled 'Paying the Price' in November 2014. The book is an account of how she returned to international swimming after being diagnosed with multiple sclerosis at age 17. (bathchronicle.co.uk, 11 Nov 2014)

OTHER ACTIVITIES
She has served as an ambassador for the charities MS Society UK, Wiltshire Air Ambulance and the Childhood Tumour Trust. In 2020 she pledged to swim 100 kilometres as part of MS Society UK's '100k Your Way' fundraiser, hoping to achieve the feat in nine weeks. (Twitter profile, 04 Feb 2021; charitytoday.co.uk, 21 Sep 2020)