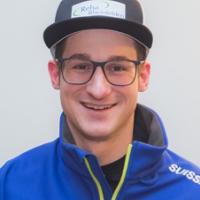 When and where did you begin this sport?
He began skiing at age four in Schwyz, Switzerland.
Why this sport?
His family lived five minutes away from a skiing area. His parents were both skiers, so he naturally got into the sport while growing up.
Club / Team
Skiclub Schwyz: Switzerland
Name of coach
Gregory Chambaz [national]

In January 2017 he injured his right Achilles tendon while competing at the World Cup event in Kranjska Gora, Slovenia. The injury resulted in him missing the rest of the 2016/17 season, including the world championships in Tarvisio, Italy. (IPC, 10 Feb 2018; paralympic.org, 14 Aug 2017)

He was presented with the Best Debut award at the 2007 International Paralympic Committee [IPC] Paralympic Awards. The honour was in recognition of winning silver and bronze at the 2006 Paralympic Winter Games in Turin. (paralympic.org, 2013)
Famous relatives
His wife Evelyne has competed on the Para alpine skiing circuit as a guide for skiers with a visual impairment. (tagblatt.ch, 24 Jan 2022; paralympic.org, 26 Feb 2019)
Ambitions
To win gold at the Paralympic Winter Games. (paralympic.org, 26 Feb 2019)
Impairment
He was diagnosed with hemiplegia [paralysis] in his right arm at six months old. (thomaspfyl.ch, 30 Mar 2016)
Other information
RETIREMENT PLANS
He intends to compete in Para alpine skiing until the world championships in 2023, and then retire from the sport to spend more time with his family. "Then it will [have been] 20 years in this sport. This is a lot. Enough for my wife and enough for me." (paralympic.org, 26 Feb 2019)