The 31-year-old became Canada’s first female Paralympic snowboarder at Sochi 2014, finishing ninth in the women’s snowboard-cross, on the sport’s debut at the Paralympic Winter Games.

Salt, who took up snowboard at 13-years-old, had a life-threatening motorcycle accident in 2011 and as a result lost her right leg 10 inches above the knee. Whilst recovering in hospital, she received the visit of Canada’s Para ice hockey captain Greg Westlake, who encouraged Salt to go on practising.

Soon after, she was snowboarding again.

"It was such an incredible feeling to get back on the board after hearing it may never happen again,” she said.

Salt finished fifth in the 2014-15 World Cup overall rankings and fourth in both the snowboard-cross and the banked slalom at the 2015 IPC Snowboard World Championships in La Molina, Spain.

She climbed to the fourth place in the World Cup last season and is hoping to take another leap forward in 2016-17 where she will compete at home at the 2017 World Para Snowboard World Championships in Big White, Canada.

Salt works as an estate agent, is a motivational speaker and also participates in fitness competitions. 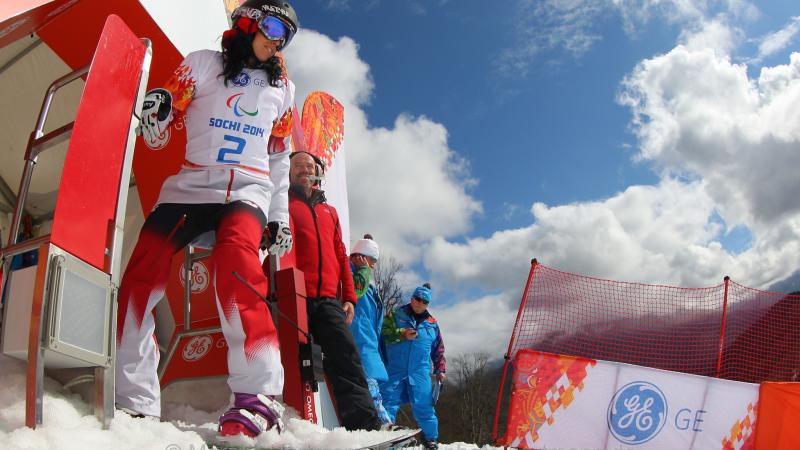 When and where did you begin this sport?
She first tried snowboarding at age 13 at Rabbit Hill Snow Resort in Alberta, Canada. She took up Para snowboard after recovering from her accident.
Why this sport?
She first tried snowboarding on a school trip when her friend tried the sport but did not enjoy it and decided to swap her snowboard for Salt's skis. Three weeks after her accident, Canadian Para ice hockey player Greg Westlake visited her in hospital to give her advice on how to get involved in Paralympic competition.
Club / Team
Evolve Snowboard Club: Canada
Name of coach
Mark Fawcett [national], CAN

In 2014 she suffered a knee injury and took one year to fully recover. (Athlete, 07 Mar 2018)
Sporting philosophy / motto
"When you feel the worst and you try your hardest, you gain the most." (Athlete, 07 Mar 2018)
Other sports
She participated in national fitness competitions in Canada before and after her accident. She has also competed in Para cycling at national level. (insidefitnessmag.com, 29 Mar 2015; yobeat.com, 15 Mar 2017; Athlete, 07 Mar 2018)
Milestones
In 2014 she became the first female athlete representing Canada to compete in snowboard at the Paralympic Winter Games when the sport made its debut in Sochi. (SportsDeskOnline, 14 Mar 2014)
Ambitions
To become a dual-sport Paralympian. (Athlete, 07 Mar 2018)
Impairment
In June 2011 she lost control of her motorcycle and crashed, hitting a guardrail twice. Her injuries included breaking her pelvis, hips, L4 and L5 vertebrae and clavicle, puncturing a lung and bruising her spleen. Her right femur severed an artery which almost led her to bleed to death. She was on life support for seven days and underwent five operations, one of which was to amputate her right leg eight inches above the knee. (insidefitnessmag.com, 29 Mar 2015; Athlete, 07 Mar 2018)
Other information
OCCUPATION
She returned to work five months after the amputation of her leg, and soon after she became a licensed real estate agent. "I have to work to support myself, but I think real estate and sport go hand in hand. I've learned to turn stress into something positive. Both sport and work have allowed me to do that with one another. It's definitely not easy to manage work and training. But when you're passionate about something, you learn to balance." (zolo.ca, 18 Jul 2018)

OTHER ACTIVITIES
Since 2014 she has served as an athlete mentor for Classroom Champions, a non-profit organisation that uses Olympic and Paralympic athletes as role models to help children set goals and improve digital literacy. (Athlete, 07 Mar 2018; classroomchampions.org, 2016)

Salt on the way to make Canada proud