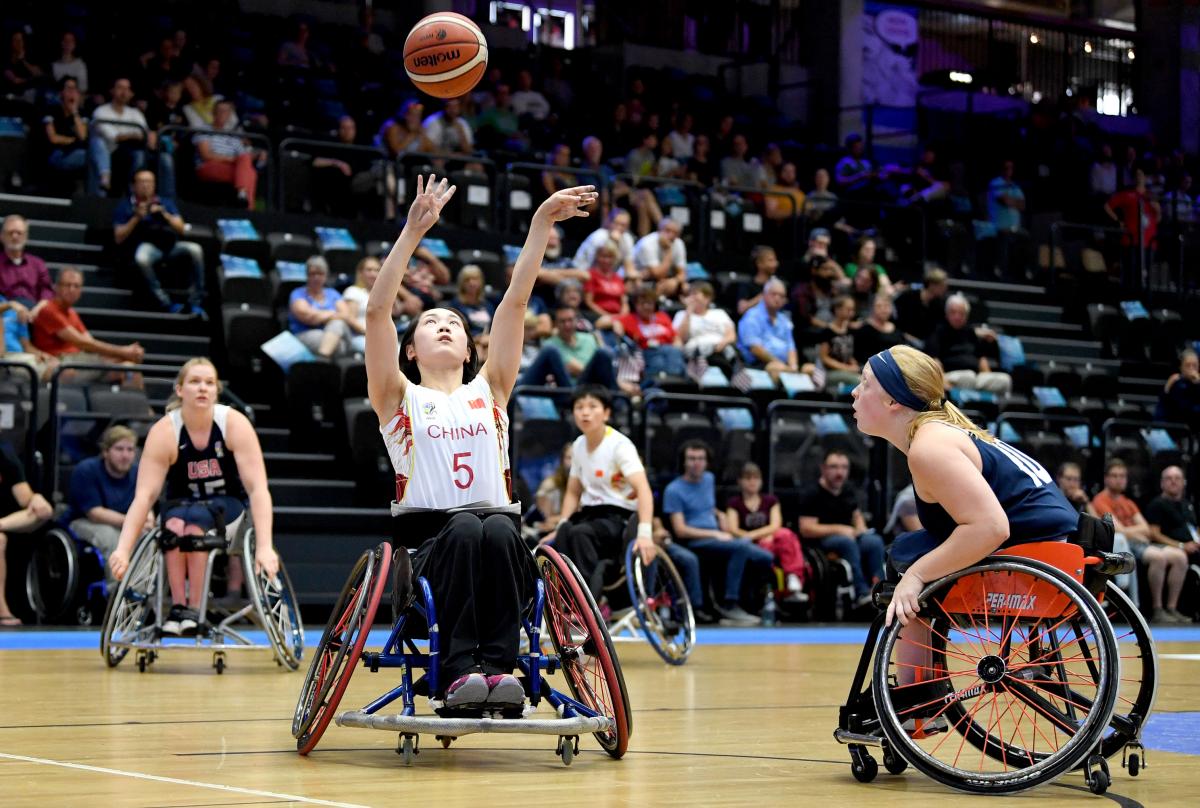 China condemned USA to their second consecutive defeat at Hamburg 2018

Ⓒuliphoto.de
By Hamburg 2018 LOC and IPC

China, Great Britain and Netherlands all won their games on Monday (20 August) to go 4-0 in their respective women’s groups.

China handed reigning Paralympic champions USA their second straight defeat (64-43) to join Germany at 4-0 atop the Group B standings.

After a balanced first two quarters, China came out of half time with increased speed to go up by 16 points. Xuemei Zhang led the way for China with 22 points and eight rebounds.

China will face hosts Germany on Wednesday (22 August) in the last preliminary round match to decide their group leader.

"I am feeling very good right now,” Zhang said. “I am very happy because it is the first time that we won against the US team. I am really excited."

Over in Group A, Great Britain put away Australia, 63-38, behind Amy Conroy’s 21 points.

Meanwhile, the Dutch took their third victory, thrashing Brazil by more than 40 points to win 73-27. Mariska Beijer continued her dominant form on offense with 31 points.

"We expected to win the game,” Dutch head coach Gertjan van der Linden said. “When you see the difference between Brazil and us - we did the right thing. All the players were playing, so that's good."

France were able to secure their first win in Hamburg, topping Argentina 43-32.

The game of the day was a thrilling Dutch victory over reigning world champions Australia, 58-53.

Australia held the fourth quarter 40-39 lead. But Netherlands went on a six-point run, with Mustafa Korkmaz scoring the final points to seal the win; he finished with 15 points and five assists.

"They fight back as a great team, the Australians, we know,” Dutch head coach Cees van Rootselaar said. “And if you come behind, you still can win the game. That's very good from the team. They show fighting."

“Their first spot in our group is well deserved,” Anderson said. “Today the mental hurdle has been too big for us being 22 points back. We had a lot of turnovers, missed our free throws. Iran had those three scoring guys and a strong bench - it was just too much for us to handle with."

On the other hand, Brazil added a tick to the win column by holding off Japan 69-61.

Crossover games are underway for men’s teams, while group games continue for the women’s side on Tuesday (21 August). Competition concludes with medal games on 26 August.

Complete results can be found on the International Wheelchair Basketball Federation’s website.