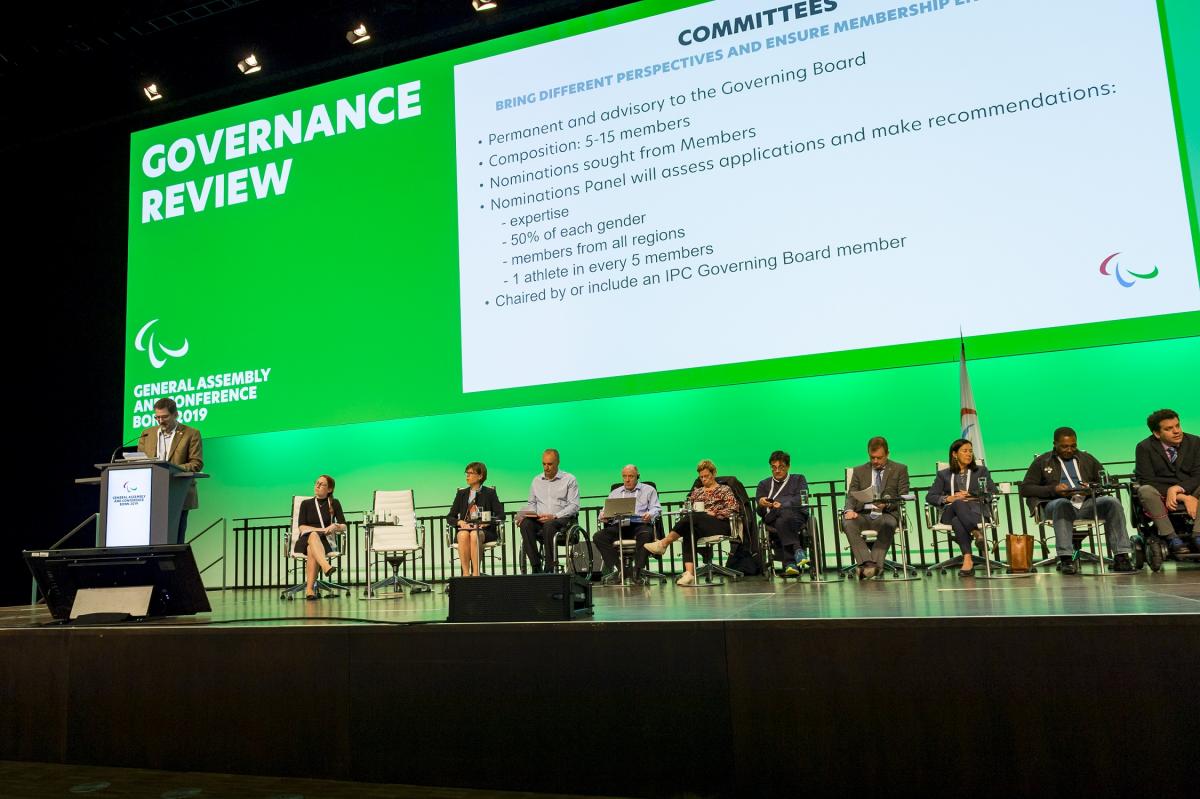 CEO Mike Peters addressing the members and other dignitaries during the IPC Conference in Bonn on Friday.
ⒸRalf Kuckuck
By IPC

You can read Remaining Fit For Purpose here.

In the proposals, which IPC members were presented with for the first time at the IPC Conference in Bonn, Germany, nine key principles for change were outlined, they are:

Purpose: The purpose of the IPC will focus on promoting inclusion in society through Para sport, specifically by:
1.    Its leadership of the Paralympic Movement
2.    Its supervision of the Paralympic Games
3.    Its support of the NPCs, IFs, IOSDs, Regional Organisations and athletes

It will cease acting as an international federation for the 10 IPC Sports through a managed exit process. It will also restructure the Agitos Foundation to simplify its governance and bring its operations back into the IPC to achieve development of Para sport more efficiently.

Membership: Some adjustments to the categories of members and the criteria for them are proposed including for IPC Sports and Recognised International Federations. The role and structure of Regional Organisations is also clarified.

Wide engagement: The mechanisms for engagement in decision-making will be improved to enable regular and wide participation by all IPC members and others in the Paralympic Movement.

Greater athlete engagement: There will be greater engagement with athletes in decision making at all levels of the IPC.

Role clarity: The roles and procedures of the President, the IPC Governing Board and the Chief Executive will be clarified to ensure effective and efficient decision-making and to set out their leadership, governance and management obligations respectively.

Aligned committees: The number, nature, composition and role of the various committees, and working groups will be refined to align to the strategic priorities of the IPC.

Skilled and diverse people: The people who sit on decision-making bodies within the IPC must have the necessary skills and expertise for the tasks they are doing. They must also reflect the diverse nature of the Paralympic Movement, which requires prioritising the appointment of people with disabilities, people from all regions of the world and gender balance.

Integrity standards: High standards of integrity and behaviour will be required of its people and its members with independent bodies in place to enforce those standards.

Transparency: Greater transparency of decisions and the decision-making process with new IPC practices and procedures to be implemented to ensure openness and accountability to the membership, stakeholders and the wider Paralympic Movement.

Andrew Parsons, IPC President, said: “Everyone involved with the Paralympic Movement wants the IPC to remain a world leading sports’ organisation and nowhere is that desire felt stronger than within the IPC Governing Board.

“In order to achieve this, in today’s ever-changing sporting landscape of greater scrutiny and accountability, it is vital that we have in place the best and most up-to-date sports governance structures.

“These proposals are the result of 18 months’ worth of consultation and dialogue with IPC members, athletes and key stakeholders, as well as development work by the IPC Governance Review Working Group. The proposal document is by no means a finished article, but it does aim to make the IPC more membership focussed and athlete-centred.

“Over the next 12 month we will see further dialogue, consultation and feedback with members before holding an Extraordinary General Assembly in December 2020 to approve the changes.”

In April 2018, the IPC announced a review of its governance structures for the first time since 2004, establishing a Governance Review Working Group led by IPC Vice President Duane Kale.  Since then there has been extensive consultation with IPC members and key stakeholders, including September 2018’s IPC Membership Gathering.

Following the presentation and publication of the reforms, there will now be 12 months of consultation with IPC membership to gather feedback.  An Extraordinary General Assembly will take place in December 2020 and, if approved, the principles will be implemented through a range of changes in the Constitution, By-laws (to be changed to Regulations), practices and procedures of the IPC as set out in the proposal.