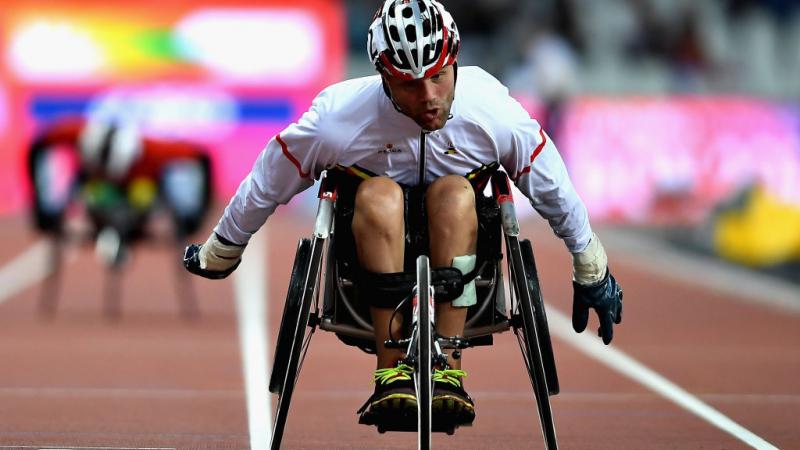 A former wheelchair rugby player, Genyn switched to Para athletics in 2014 after breaking his leg when he fell out of his wheelchair on a bumpy road. Advised it was too dangerous to continue playing rugby, Genyn turned to the track and hasn’t looked back.

Double gold followed at the European Championships in 2016, with a new world record in the 400m T51 too.

At the Rio Paralympic Games, Genyn was on top once again, winning two more gold medals. The King of Belgium called to congratulate him and at the end of the year he received the 2016 Vlaams Sportjuweel (Flemish Sports Jewel), presented by the Flemish government annually to the athlete who has delivered a remarkable and exceptional sporting performance.

At London 2017 Genyn topped the podium yet again, retaining his two world titles.

When and where did you begin this sport?
He took up wheelchair rugby in 1993 and switched to Para athletics in 2013.
Why this sport?
His parents encouraged him to continue to play sports after his injury. He played wheelchair rugby until November 2013, but had to stop after he broke his leg. He then began focusing on athletics. "I was always the fastest in rugby, so sprinting was a good alternative."
Club / Team
Wapper VZW: Wommelgem, BEL
Name of coach
Mieke Van Thuyne, BEL

He broke his femur in 2013 after his wheelchair caught on a large steel pin protruding from the ground and brought him down. (paralympic.org, 17 Apr 2018)

He was Belgium's flag bearer at the closing ceremony of the 2016 Paralympic Games in Rio de Janeiro. (sporza.be, 19 Sep 2016)

HIGHER EDUCATION
He has a degree in computer graphics. (Athlete, 23 Oct 2015)