Do you scrape your elbows when handcycling? How do you steer a bike with one arm? What is the scariest part of racing in the velodrome? Get the answers to these questions and more from seven Para cycling and Para triathlon medallists 03 Jun 2022
Imagen 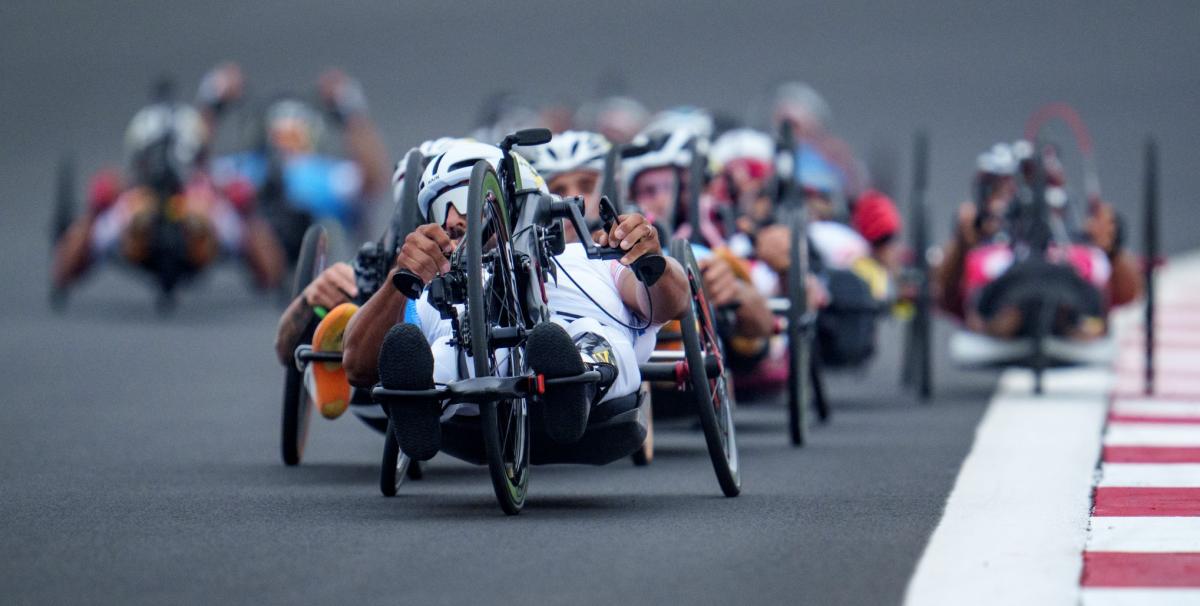 Get ready to rumble: Road races are among the most exciting events on the Paralympic Games programme.
ⒸThomas Lovelock/OIS
By IPC

Track, road, triathlon. Tandems, handbikes and tricycles – there is a bicycle and cycling discipline for any person and any taste. And what better day to get the wheels rolling than on World Bicycle Day?

To get you started, we approached seven Paralympic medallists in Para cycling and Para triathlon to answer your questions about their sports, from the serious kind to the things you were always curious about but never dared to ask.

Scroll down, boost your bike trivia and be inspired to go for a ride.

How fast can a handbike go?

Florian Jouanny, France, Paralympic and European champion in Para cycling: A handbike can go very fast, especially thanks to good aerodynamics. Normally, I ride at more than 80km/h when going downhill.

What is the scariest part about racing at a velodrome for the first time?

How does an athlete steer the bike if they are missing an arm or a leg?

Uda Hideki, Japan, Paralympic silver medallist in Para triathlon: I have only one arm, so I have customised it so that I can brake the front and rear with one lever. Athletes without both arms also wear prosthetic hands to operate. One-legged athletes are divided into those who wear artificial legs and those who do not. Wheelchair athletes use their arms to move the pedals.

There are as many customised bikes as there are athletes. We are customising them so that everyone can operate them comfortably.

How do handbikes turn curves?

Annika Zeyen, Germany, Paralympic and world champion in Para cycling: The front wheel of the handbike can turn towards the left and right side. As a handbiker, you always have your hands on the crank and you can actually turn while cranking by just moving the one side of the crank further towards you while the other side then moves further away from you. That way the front wheel turns.

What is different about the tribicycles used in the T2 class?

Juan Betancourt, Colombia, Paralympic bronze medallist in Para cycling: The T2 class offers more balance for people who have difficulties keeping their balance so that they do not fall.

Are all handbikes the same or are they custom-made for each athlete?

Luca Mazzone, Italy, Paralympic and world champion in Para cycling: The handbikes are basically all the same. The most famous brands can be counted on the fingers of one hand. However, some handbikers have the luck and the financial opportunity to use handbikes that are custom-made by specialised companies and engineers. Over the past 10 years handbikes have undergone a great evolution in terms of the materials and aerodynamic and structural design, which has taken them to a great performance level and allowed them to reach greater and greater average speeds.

What do the athlete and guide say to each other during a race?

Susana Rodriguez, Spain, Paralympic, world and European champion in Para triathlon: The athlete and the guide communicate during the races. The guide will give all the needed instructions to show the blind athlete how the course is. For example, in what position they are in the race, where there is going to be a turn, if they have to stand up on the bike, etc. And the athlete may give feedback. For example, if they feel they can push harder or not.

How much do you train, and how do you split that time between the velodrome and road cycling?

Paige Greco: I train six days a week and have one day completely off for recovery. My training block will depend on what competition I have coming up. If it’s track, it’s more of a track focus and I will be on the track two to three times a week and the other days alternating gym and road riding. If I’m leading into a road event, I would predominately target more hours on the road and drop track training down to one session a week.

What do the athletes say to each other before the race and after the race?

Juan Betancourt: Each one of us has different goals and we must have those in mind in each moment, in each competition, to have great results.

What are the dangers of handcycling? Do athletes get sore necks? Do they scrape their elbows?

Annika Zeyen: One of the dangers of handcycling is that you can flip over when you go through a tight curve with too much speed.

Getting a sore neck is definitely something that every handbiker has experienced. The position in the handbike is not really the best position for the neck. Some handcyclists scrape their elbows and others don’t. It depends on the positioning in the bike and how long the arms of the athlete are. For an athlete with long arms and a position that is very close to the ground there is for sure the danger of scraping the elbows.

Florian Jouanny: There is no protection for my elbows but they sometimes rub on the ground, for example, on the speed bumps. You have to plan ahead to avoid this.

Luca Mazzone: spalle e i dolori al collo e spalle sono problemi molto probabili a tutte le categorie ma sopratutto a quelle piu' basse per i motivi descritti precedentemente
The athletic movements, depending on the category, are supported by the muscles of the trunk. The lower the category, the fewer the muscles that 'take part' in the pedaling and therefore the same action is more tiring. The lower categories such as H1 and H2 do not have the support of the abdominals and the grip of the hands on the knobs, so they use a lot of the muscles in the shoulders. Neck and shoulder pain is very likely in all categories, but especially in the lower ones for the reasons described above.

Does the guide of an athlete with a vision impairment also win medals?

Susana Rodriguez: The athlete’s guide does also win a medal in the events where they do a physical effort, like in Para cycling, in running races, in winter sports and also in Para triathlon. 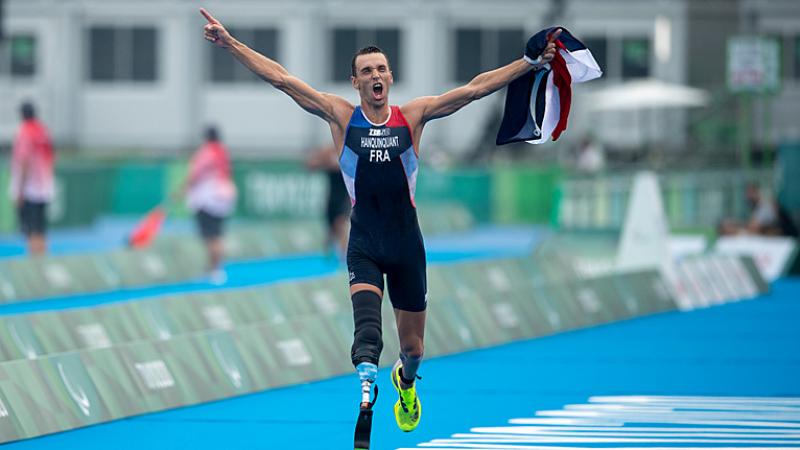 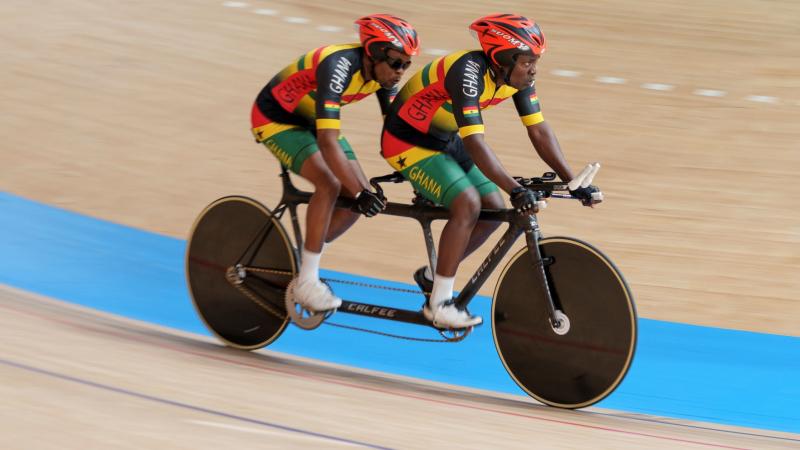 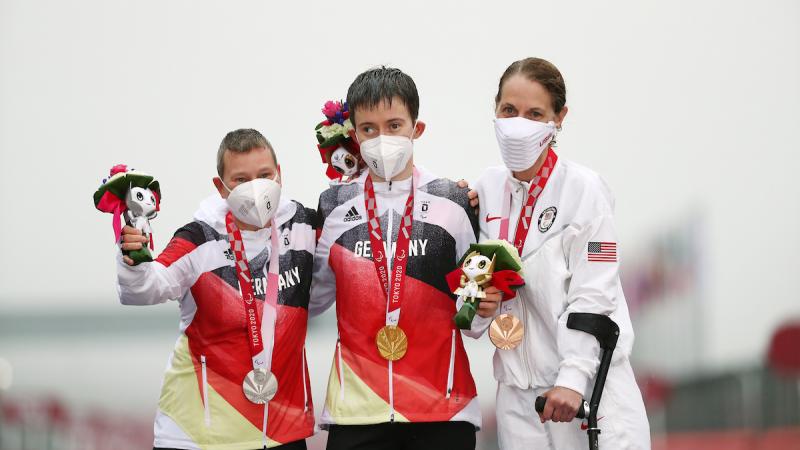