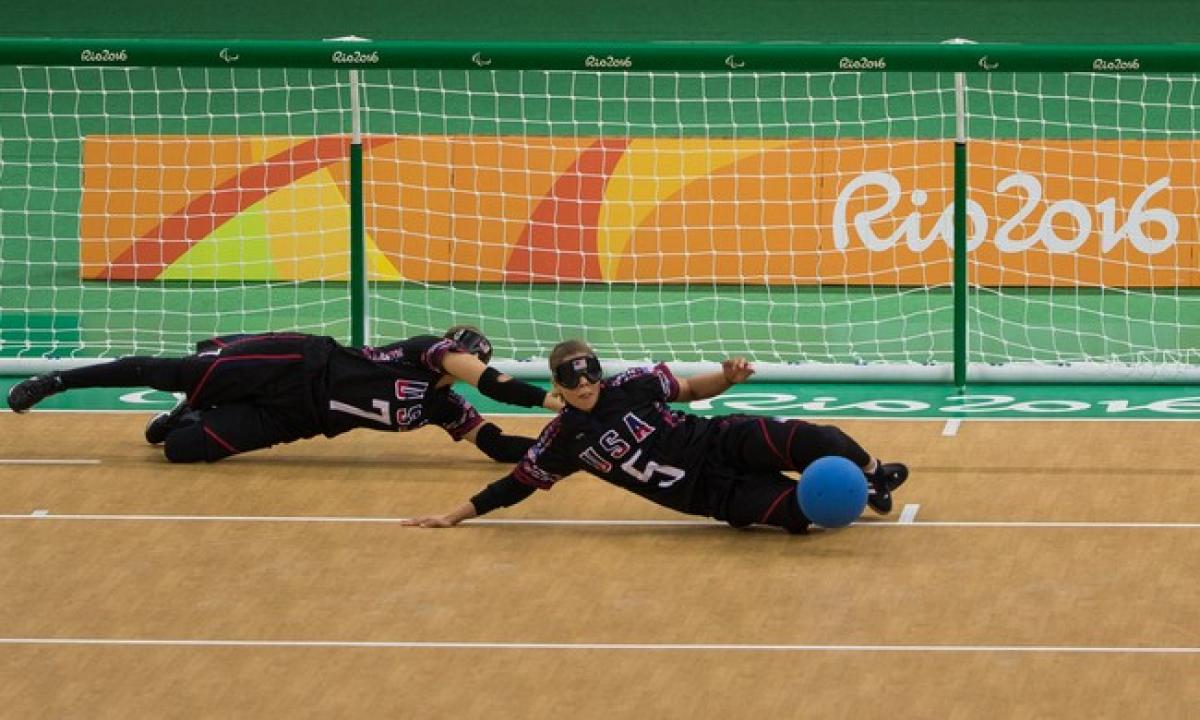 Goalball is played exclusively by athletes who are blind or visually impaired. It was invented in 1946 to help rehabilitate veterans who had lost their sight during the Second World War. Hans Lorenzen of Austria and Sepp Reindle of Germany are credited with inventing the game.

Players must wear opaque eyeshades at all times ensuring fair competition. All international athletes must be legally blind, meaning they have less than 10 per cent vision.

Teams are made up of six players, with three members playing at any one time. The three positions are centre, right wing, and left wing.

The object of the game is to throw a ball using a bowling motion past the opponents and into their net to score points. This can be achieved by bouncing, curving, and spinning the shots around the opponents. Players stay on their hands and knees to defend their net and score against their opponents.

A goalball court is the same size as a volleyball court, measuring 18 metres long and nine metres wide. It has goals at each end covering the entire nine-metre back-line. String is taped to the markings on the court to allow players to feel the lines and orientate themselves.

The ball weighs 1.25 kilograms, is approximately 76 centimetres along its circumference and contains bells to allow players to hear it and track its movements.

Only players and referees may talk or make noise during play. Coaches, teammates on the bench and spectators must remain silent so players can hear and locate the ball. Officials use verbal commands to inform players of what is happening during the game.

Goalball requires two referees during each game. Four goal-judges remain at the corners of the court to verify if the ball touches or crosses the line into goals. They also retrieve the ball when it goes out of bounds.

When a member of the defensive team touches the ball, they have 10 seconds to throw it back without being penalised. Penalties normally result in a penalty shot, during which the penalised player has to defend the entire nine-metre net alone.

Along with the 10-second violation, penalties are also awarded for high ball, long ball, excessive noise, delaying the game and touching one’s eyeshades.

Goalball was a demonstration sport at the Heidelberg 1972 Paralympic Games. In 1976, it made its official Paralympic debut when eight international men’s goalball teams competed for medals at the Paralympics in Toronto, Canada.